I Wish Someone Would Invent: A Comic-Con Street-View

One of the things about coming home from Comicon for me is that someone will ask me what it was like or what I saw, and to remember, I inevitably sort of revisit a virtual map of the room in my head, remembering who was in what aisle, what was on which corner, etc. Of course, the squishy organ in my head is limited, and fallible, and so I wish someone would invent an actual street view of Comic-Con.

As most people know, on Google Maps there is a feature called Street View, in which you can see a 360-degree panorama from almost any position on any road in any city. Google accomplishes this by sending out a Street-view car on all of these roads which has an apparatus that takes a photo in every direction, then stitches them all together to make a panorama. The Google apparatus is mounted on top of a car, but what if someone were to make one that sits atop their shoulders or on a backpack or on a hat? That person could walk around the San Diego Comic-Con, New York Comic-Con, C2E2, or Wizard World Anywhere and create an document that would accomplish several goals:

1. A record of what was there that year. How many people did you see and forget? How much of the show did you not have time to explore? What was the new hot thing in 2010 that is utterly forgotten a decade later? Or hey look, it's the next decade's most popular artist as a 22-year old indie creator! How cool would it be to review all of the things the comic show had that year?

2. Promotion of the show. Not everyone goes to a show for the big names that are in the advertising. What if the show has a decent showing of indie creators that are local to the area? What if there are a bunch of booths selling just the sort of thing you're a geek for? What if you have no idea what a comic book convention is like? A chance to quickly check out a show could make the difference to someone on the fence about shelling out the money to go out there.

3. A chance for exhibitors to improve their convention presences. Let's look at the Convention Street View. Oh no, you can't even see me in the sea of people. I need a sign that's at shoulder height or a name tag on the side of my table. Maybe a big sign behind me. Oh wait, that guy did it and it looks terrible! And so forth. It's hard to think about what you really need when you're just scrambling to get all of your stuff on a plane and to the convention hall. Something like this could really focus one's efforts.

A project like this would take time (it's tough to get everywhere in a crowded comic convention), money (cameras aren't free), effort (stitching all the photos together), infrastructure (a map to place this into), and motivation (something beyond it being cool), so it seems like it would either have to be an extremely motivated comic geek, someone on the staff of each convention, or Google itself, or a combination thereof. Perhaps an individual creates the camera-hat and the convention pays him to photograph the show, then Google uses its technology and infrastructure to create the map, linking it from the individual's website and the show's website. Everybody wins!

Especially me, because I never remember what I saw at Comic-Con. I was druh-unk.

So, you want to invent it? Already know about a gadget just like it? Got a reason why it would never work? Got some suggestions? Got your own "I Wish Someone Would Invent..."? See you in the comments!
Posted by Unknown at 11:15 AM No comments:

Email ThisBlogThis!Share to TwitterShare to FacebookShare to Pinterest
Labels: Conventions, I Wish Someone Would Invent

Holly Butcher over at Neon Tommy asked Dan Olson and me to chat about our convention experiences. We had the damnedest time trying to find a quiet place to talk, and finally found a patch of concrete nestled between some locked doors and a giant air conditioner. Here's how it all went down:


Thanks, Holly! And thanks to Kristin at Altered Esthetics for hooking us up.
Posted by Kevin Cannon at 5:52 PM No comments:

The Annual City Pages Comix Issue will be coming out a week earlier than expected -- good news for people who can't wait to read it, ... possibly bad news for cartoonists who haven't submitted yet!

All the [updated] submission info can be found here:
SUBMISSION GUIDELINES 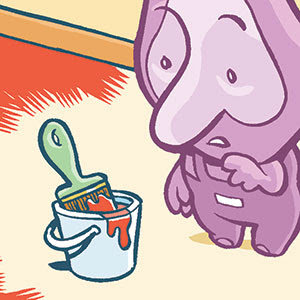 Posted by Kevin Cannon at 10:27 AM No comments:

It's hard to believe that August is right around the corner, but even harder to believe that Lutefisk Sushi Volume D will drop on August 6. Details are below. And why not RSVP on facebook?

Comic Art: Lutefisk Sushi D
A bento box full of mini-comics from Minnesota artists! Served to you with love by the kind folks at Big Time Attic, Altered Esthetics, and the International Cartoonist Conspiracy.

Now, steal this image and send it to all yer friends: 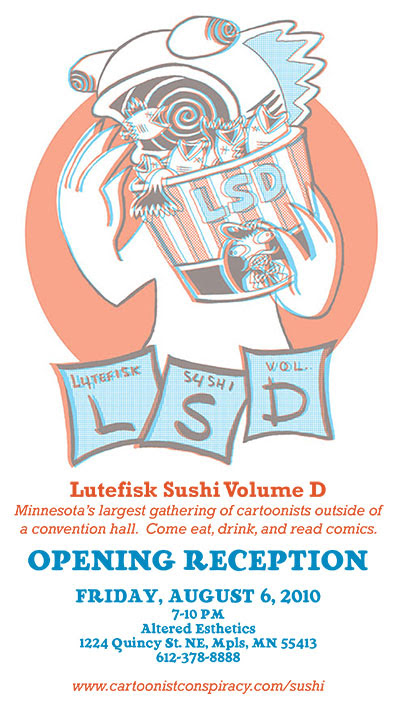 Posted by Kevin Cannon at 4:07 PM No comments:

Lupi McGinty documents one of my favorite traditions: the Lutefisk Sushi collating party. This year we raised the excitement level up a notch by tacking on some off-menu pizza and starlight bowling at Elsie's, accompanied by lots of Grain Belt.

Click HERE to view the productive portion of the night. 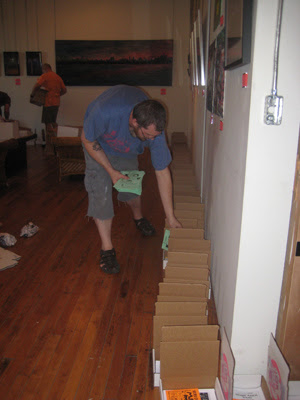 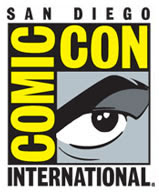 Hey, we'll be in San Diego for the Comic-Con, so come say hi!

Zander will be sitting at booth AA12 in Artist Alley all week (Thursday through Sunday).

Catch me behind the Top Shelf booth Friday and Saturday. Please bring a sketchbook for me to draw in -- I like to keep busy.
Posted by Kevin Cannon at 2:58 PM No comments:

Hey everyone, I know it seems far away, but we're already at the voting stage for the theme of next year's Comic Art Show over at Altered Esthetics gallery. Two years ago was Lutefisk Sushi C, last year was Big Funny, this year is Lutefisk Sushi D, and next year is up for grabs.

Please note that unlike the Sushi shows, this show is open to ANYONE -- You do NOT need to reside in Minnesota to participate.

Posted by Kevin Cannon at 8:51 AM No comments:

A die-hard Twins fan and sports writer friend of mine is turning 30 today, so to celebrate I dusted off the watercolors to see if I could capture the essence of Local Hero Joe Mauer.

Here's the pencil sketch base: 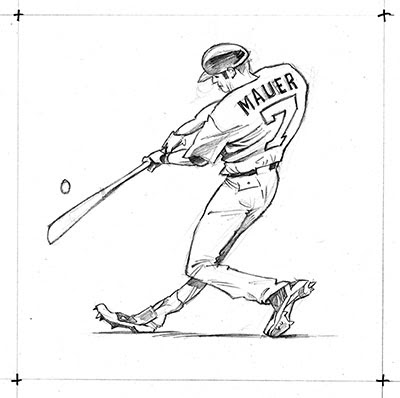 Using the light table I traced the pencil sketch onto watercolor paper. The paper had already been treated with a light coffee stain to give it an aged character. This scan didn't pick up a lot of the color -- the original is a lot richer: 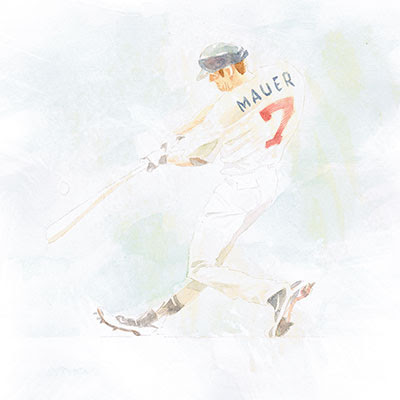 Finally I placed some transparency film over the original pencil sketch and painted this with Speedball India ink: 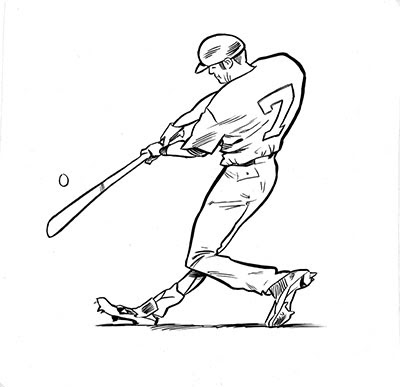 One problem I ran into is that I didn't pay close enough attention to registration, so there was some guesswork at the end as to where to cut the paper and the film in order to fit them in the frame. Here's the final product: 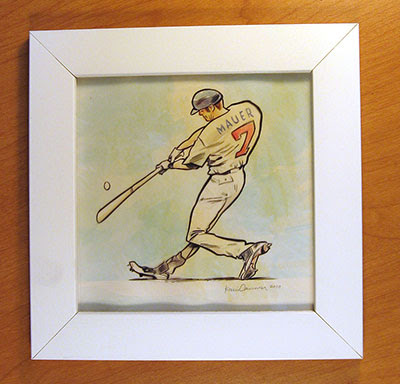 City Pages Submissions Due in ONE MONTH!

Yep, one month left to describe what INDEPENDENCE means to you ... in comics form.

As you all know, City Pages will be having its fourth annual CITY PAGES COMIX ISSUE this August, and is looking for submissions from local cartoonists. Lucky for you, this issue will coincide with the much anticipated MPLS INDIE XPO (August 21) and LUTEFISK SUSHI VOL. D (August 6-26).

Get ALL the submission details at this handy site:

Thanks!
Posted by Kevin Cannon at 12:21 AM No comments: