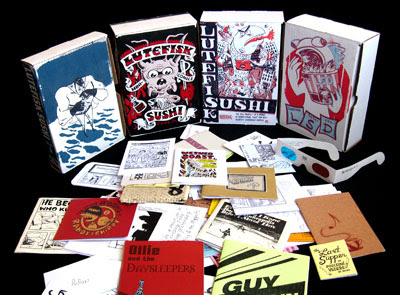 Minnesota's premier comics art show LUTEFISK SUSHI is back for its fifth season in 2012. While the opening reception is over fifteen months away, we need to decide on a featured artist ASAP! As in past years, the featured artist will design the sushi box, and will have a whole wall devoted to their artwork during the gallery show at Altered Esthetics in November, 2012. See websites of past shows here.

To nominate a cartoonist, please send the following info to nordeastcomics [at] gmail.com:

NOTE: Artists must reside in Minnesota or have some strong connection to the state.
NOTE: If an artist does not wish to be nominated, or does not respond to us before August 25, they will not be listed as a nominee.

As in past years, voting will take place on www.cartoonistconspiracy.com/conspire. So jump on that site between August 25 and September 1 to vote! Voters must register on the Cartoonist Conspiracy website (it's free). Voters may vote only once.

Questions? Post them in the comments section below.
Posted by Kevin Cannon at 2:47 PM No comments: