Check out BTA alum and current Puny frontman Vincent Stall as he tells TDCH all about his favorite things. Stall (aka King Mini) shared a studio with Zander back in the day, and his work is currently gracing the walls of the Minnesota Museum of American Art. 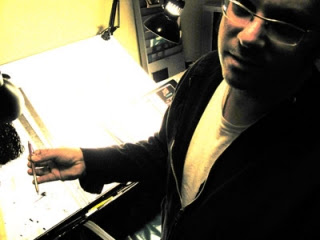 The Daily Cross Hatch
MMAA (exhibit closes January 4)
Posted by Kevin Cannon at 11:31 AM No comments:

The End of Big Time Attic?!?

Not quite, but Lewis Tuck makes a strong case for how it will all go down in the end:

If you'd like to submit a BTA comic, read more here.
Posted by Kevin Cannon at 2:44 PM No comments:

Seed Magazine Names Stuff of Life a Best Book of 2008 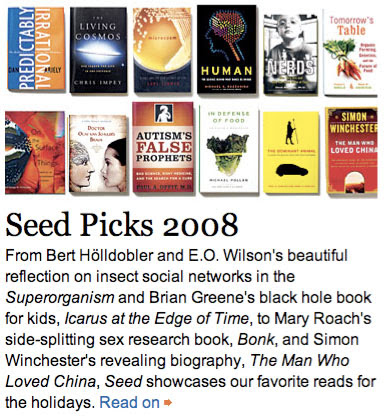 Kevin and I joined Steve Stwalley (Soapy the Chicken, Stwallskull) and Danno Klonowski (Staplegenius!) to chat with Britt Aamodt on the Wave Project at KFAI 90.3 FM last night.  The show was called "The Cartoonists", and covered what it's like to be a cartoonist, what is the nature of cartoons as opposed to illustration, and various other chit-chatty stuff.  We had a great time, and it was pretty cool to be in a radio station, getting our hands slapped away whenever we tried to touch the fancy microphones.

You can listen to the broadcast on the KFAI website here until December 28, 2008:  The Cartoonists
Hang in there-- the previous show (an Oromo music show called Voice Of Oromiyaa) ran a little late, so the show starts at 1:38.
Posted by Unknown at 11:35 AM 2 comments:

Our new graphic novel, The Stuff of Life, will be in stores on December 23rd, just in time for Christmas, if you hurry. To whet your appetite until then, we have a cartoon to show you that will give you the gist of the book. Click the image to watch the video. 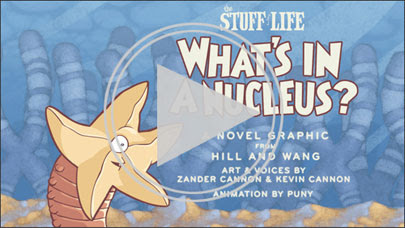 If your computer can handle it, click on "watch in higher quality".

For this animation,
1. Kevin wrote the story and storyboarded it, then
2. Kevin colored the characters from the book and digitally painted the background, then
3. PUNY started the process of preparing the characters for animation, then
4. I did the voices for Bloort and Floorsh (Kevin has a cameo role; see if you can find it), then
5. PUNY animated the characters to match my voice, then
6. PUNY added sound effects and music, then
7. I recorded my voice singing along to the music, then
8. PUNY put it all together (magically, as far as I could tell).

I expect that PUNY will put up a post about some of the animation techniques; I can only offer what it was like to do voices for a cartoon. First, I went down to record in PUNY's high-tech interim sound booth (a foam cartoon character costume about 2 1/2 feet in diameter hung from the ceiling with a fancy microphone electrical-taped to an incompatible mike stand all wired to a laptop three feet away), . 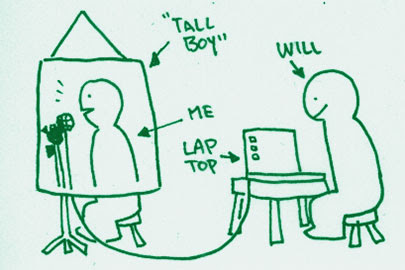 Will Shepard did the directing and sound editing (I actually spoke all of the lines several times before moving on to the next one, and I did the characters separately) and tweaked it all together to make it all sound funny and natural. All the little "ohh..."s and "A-ha"s were recorded completely out-of-context as a long stream of interjections, and he figured out where to put them in and make me sound like a pro. Nice work, Will!
Every time I went down to PUNY to do voices, I saw the incrementally-more-finished sound booth in which one day, ONE DAY, I will record some voices. Probably for some energetic, educational cartoon dog.
Finally, I offer my stunned amazement at how beautiful the animation was for this sequence. PUNY will have more detail on who did what, but all I can say is I think it looks fantastic.

The video can be seen at:
Big Time Attic's YouTube channel
and
Hill & Wang's official The Stuff of Life page.
Not to mention
The PUNY Blog
which has Mike Owens' insights about animating the short, as well as some photos of the swanky sound booth.
Posted by Unknown at 10:02 AM 5 comments:

Here's a drawing I did for the Grinnell College Debating Union. For each debate, the house takes a controversial stand on some timely topic, and then the Pros and Cons duke it out. This debate's topic is:

THIS HOUSE WOULD ABOLISH CHRISTMAS 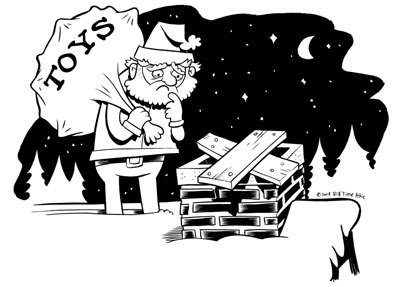 I've had the pleasure of being the official Debating Union poster artist since I was a freshman on Langan 3rd back in 1998. Wow, that makes it ten years -- the longest job I've ever had!
Posted by Kevin Cannon at 9:46 AM No comments: