Mark Schultz had a great conversation with Ira Flatow on Friday. You can listen to the 12 minute segment here: 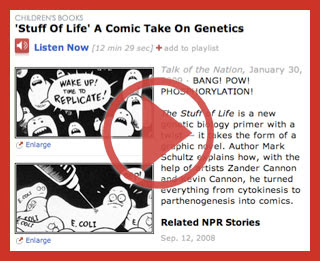 "Sports on a Stick" Launches 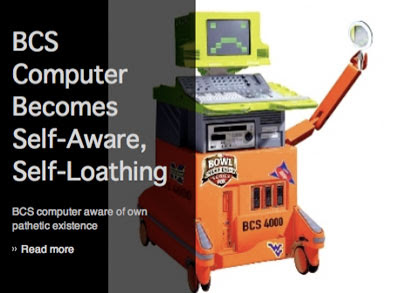 If you find yourself frittering away your office hours by bouncing between TheOnion.com and ESPN.com, then you're ready for SportsOnAStick.com.

My cousin, Sam Testa, is one of the producers, and he's been cracking me up since he was three years old (I have the grainy VHS tapes to prove it). But since then he's honed his poop jokes into sports jokes, and with Ben Malmo and a huge bullpen of writers, launches SoaS this week.

Plus, I drew the logo!
Posted by Kevin Cannon at 4:55 PM No comments:

Mark Schultz will be talking about The Stuff of Life on NPR's Science Friday this week. Call in!

I assume they'll talk about what a great time it is for readers (and creators) of science comics. This month, for instance, marks the debut of Peter Bagge's science comic for Discover Magazine. The internets are also buzzing about an upcoming Darwin graphic novel (what, is it his 200th birthday or something?)
Posted by Kevin Cannon at 4:08 PM 1 comment:

It's always fun to get back-to-back packages of books in the mail.

The Stuff of Life: A Graphic Guide to Genetics and DNA 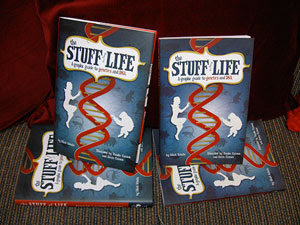 First up is The Stuff of Life, the science graphic novel that we illustrated and Mark Schultz wrote. There was a small printing snafu, which meant that the December 23 run of the book had to get pulped! The reprinted version came out officially on January 23. If you're in New York next week, get a signed copy from Zander!

Zander and I started working on The Stuff of Life back in 2006, so it's pretty exciting to finally have the finished product in our hands. Stuff marks the beginning of an era -- it's our first graphic novel drawn entirely with the Pentel Pocket Brush Pen -- and also the end of an era -- it's the last graphic novel we'll do with hand-lettering on the boards. This is due to the publisher's need to be able to make last-minute text changes in InDesign. Our next book, T-Minus (coming out in May) uses several original fonts based on my hand-writing. Our hope is that you, the reader, won't be able to tell the difference. 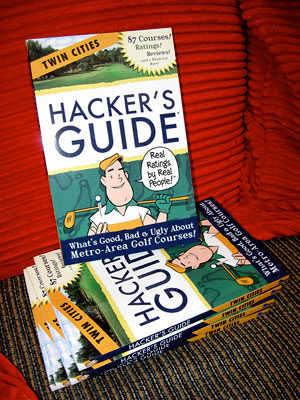 Next up is Hacker's Guide, a down to earth and very detailed guidebook of every metro-area golf course. Not a graphic novel, per se, but Zander and I created a "Hacker" character, and did the logo, cover design and packaging, and created several illustrations and logos that are used inside the book.

Hacker's Guide may seem like a random project to work on, but it's actually closely connected to the local comics scene. The book is the brainchild of Bruce Stasch, who is an in-law of Lars Martinson. Lars, of course, is an extraordinary cartoonist whose Tonoharu: Part One came out from Top Shelf last spring. Bruce actually offered the Hacker's Guide design project to Lars, but Lars had to turn it down as he is currently globetrotting.

The book will premiere at the Crown Royal Minnesota Golf Show this February. Get your photo taken with a life-size version of the Hacker Guy!

Ordering info:
The Stuff of Life: A Graphic Guide to Genetics and DNA
Hacker's Guide

There are only 24 hours left to vote for Puny as best local interactive firm. Please do it!

(Look on the right-hand column.)
Posted by Kevin Cannon at 6:34 PM No comments:

Hey, are you going to the New York Comic-Con on February 6-8, 2009?  ME TOO!  Come by my table; I'm in the Artist Alley, table B-6.  I'll be doing sketches (full figure, grayscale: $60) and selling original pages, as well as a bunch of minicomics and books you may have not heard about.
Posted by Unknown at 10:25 AM 2 comments:

Zander and I recently sat down (via email) with Van Jensen and chatted about how we could possibly find a way to make a subject like DNA interesting. You can read this lively exchange at Comic Book Resources.

Top Ten Season Two got a nice review in the Onion's AV Club: 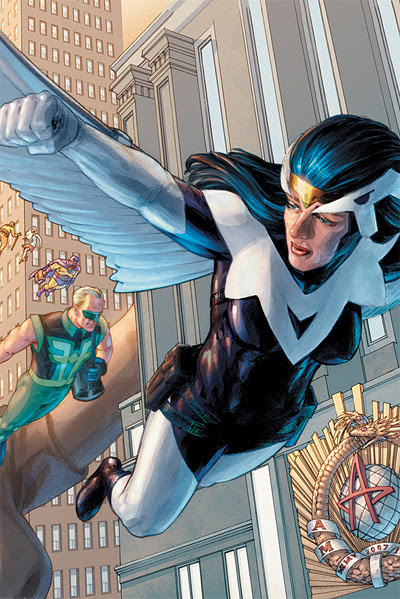 Paul Di Filippo and Jerry Ordway’s 2005 attempt to reboot of Alan Moore’s Top 10 series fell distinctly flat; it crammed in new characters and plotlines featuring old ones, but never found the humanity in the characters or the sense of wonder in the story. Original series co-artist Zander Cannon has been doing a much more respectable job with the four-issue miniseries Top 10: Season Two (Wildstorm), which wraps in February. From the first issue’s irresistible mystery to the subsequent ones’ respect for Moore’s characters, it’s a more faithful and more compelling Top 10. And hey, Gene Ha is back on art as well, which makes a major difference to the feel of these issues… B+
Not bad!  You can find the rest of the comics capsule reviews for the month here:
Onion Comics of Note
Posted by Unknown at 9:59 AM 1 comment: