Tips and Tricks: How To Come Up With Ideas

Everyone wants to know how you come up with ideas. It's certainly the least quantifiable aspect of creating stories. But while there are certain x factors that you could never really tell someone about, I feel like there are 10 basic things that if I try them all, I can get some decent ideas out of it.

How to come up with ideas.

1. Practice. I know, this is lame. But if you create things, draw characters, write stories, scribble down notes for comics or screenplays, you will get better at it. You will come up with ideas faster, you will notice what's good and bad about other people's ideas more clearly, and you will be able to refine a single notion, like a visual image or a line of dialogue, into a concept for a story without nearly as much heavy lifting.

2. List. Some time when you need to come up with an idea for something, just start listing every idea you can think of, even if it's not really an idea. Write lists of words, thoughts, lines of dialogue, lyrics from songs, objects in the room, random things that come to mind, and after about fifty of them, you might start to get some real gems. As you loosen up your mind, you start making connections between your fifth idea and your fiftieth idea, and all of a sudden, you're coming up with some cool stuff.

3. Write it down. Always have a notebook that you always put stuff in. If you're at a computer, send yourself an email. If necessary, write it on your hand. Don't wait. If you think that it's such a great idea that you'll surely remember it when you are over at your desk later, I must tell you that you are almost certainly mistaken. This goes double for dreams. You'll forget those in 30 seconds if you don't write them down before you get out of bed.

If you're nowhere near a computer, pen, piece of paper, digital recorder, or cave wall, and you're coming up with some real doozies, think of one word that represents the thought, assign it to a finger, then keep going. With luck, this real-world reminder (the finger) and its corresponding word will help you remember the idea when you get home so you can write it down. This sort of thing always happens to me when I go for a run, so it's good to have a way to remember up to 10 ideas.*

4. Do research. When I'm looking up information on, say, the middle ages, for, say, my comic The Replacement God, I also am finding about ten million ideas, not only for that story, but for completely unrelated stories and images that I might not use for ten years. It's nice also to feel like if you find something really interesting that doesn't quite fit into your current story, that you don't have to shoehorn it in; you can write it down, save it for later, and launch a whole new project out of it.

5. Listen to, and frequently mis-hear lyrics to songs. I feel like every time I listen to a song, particularly one where the lyrics are well-crafted, I'll hear a phrase or couple words that give me an idea for a story. Sometimes it's a story that would be related to the song, sometimes it's using the phrase entirely out of context. Sometimes it's not even what the singer says. Those are the best, by the way, because then it's an original idea, even though it feels like someone gave it to you!

6. See crummy genre movies. One of the great things about bad genre movies (sci-fi + fantasy ones in particular) is that they usually got greenlit based on some pretty decent idea. So even though they may be lousy in terms of an actual experience, they sometimes have an idea that, if you just took the basic concept, could be made into a cool story with a different setting and better dialogue. Don't steal ideas, of course, but sometimes you just happen upon a bare concept that gives you a million ideas, and then some joker just wastes it. Change the setting, change the characters, change the genre, and see if it doesn't look completely different while still being able to use the one good idea.

7. Remix concepts. One way to make great ideas that's pretty easy is combining two different concepts into one. Take an old story structure and put it in a futuristic setting. Take something small and make it big. Take something organic and make it synthetic. Those three templates cover nearly every science fiction story ever told. Combining two very different things is not only good kick-off point for ideas, it's also intrinsically fascinating to readers. What if a little lizard were a thousand feet tall? Boom, movie franchise.

8. Randomize. Draw a Pictionary card. I've mentioned this as a way to randomize ideas for a 24 hour comic, but this and other randomizers are great for juxtaposing two words that you never thought would go together. Another idea would be opening to a random page in a dictionary or novel. Do that a couple times and look at the words you have.

9. Do something mindless. I get most of my best ideas when I'm going for a run, going for a walk, shoveling snow, driving on the highway, or anything else where you kind of have to pay the barest bit of attention, but your mind can just wander. Just think about one thing, let it lead to another thing, and before you know it, you're thinking about something really weird.

10. Extrapolate. This may be the most important one of all. Most great ideas are actually just halfway decent ideas that someone extrapolated very, very well. For example, the idea around the Harry Potter novels: there is a secret population of wizards. Ho hum. However, once you start saying, "oh, then there are some wizards who are born to Muggles, some who are full bloods and hate the Muggles, and there's a secret wizard boarding school, actually several of them, and these are the classes they teach, and..." and so on. Getting good at this skill not only helps you create cool things once you have an idea to start from, it also helps you recognize a good idea when you see it. If hearing the idea makes your brain explode with ideas about "oh, then there must be this, and then there must be that, and these people could do this other thing...", then you know you've got a good one.

These are some of the ways that I've come up with ideas in the past. They're all basically the same concept, though: take the various random signals that come to you from the world and apply meaning to them with your mind. With practice, it becomes second nature, and you'll soon have more ideas than you have time in your life to execute them. Hooray for that.

*more than that and I have to take off my shoes, which is a terrible idea while running.
Posted by Unknown at 11:31 PM 6 comments:

I'll be the first to admit that I've been a real putz lately when it comes to FA. Chapter Thirteen is a big fatty 48-pager, so I thought I'd post the first half instead of making you wait another month for the whole thing.

If there are any readers left, please enjoy. 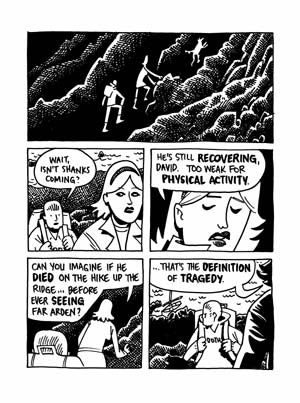 Read Chapter Thirteen (part one).
Start from the beginning.
Posted by Kevin Cannon at 11:05 PM 8 comments:

Muscles & Fights Signing at The Source: This Saturday! 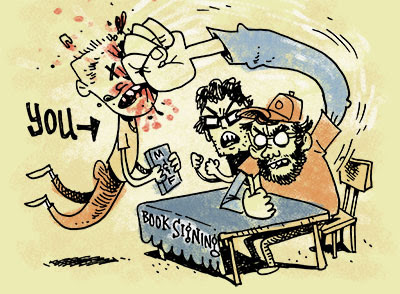 On the ICC website, Danno has posted submission information about this May's Lutefisk Sushi C show.

You should read all the text, but for veterans the boiled-down talking points are:
160 copies of your mini-comic.
Due March 15, 2008.
Posted by Kevin Cannon at 12:29 PM 2 comments: 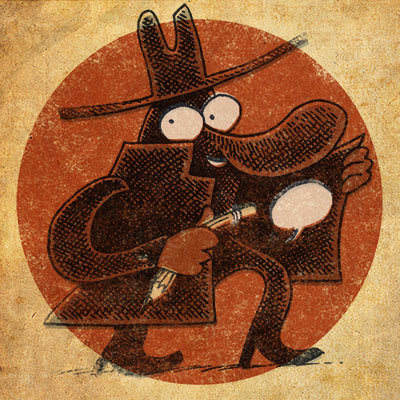 Come on over, draw some jam comics, talk about the upcoming Sushi show, eat some treats.
Posted by Kevin Cannon at 12:00 PM No comments: