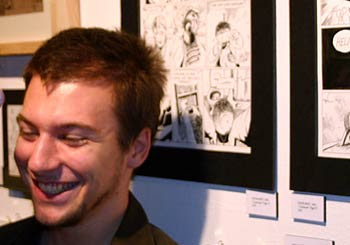 Max says that he's not feeling photogenic, so I scrounged up this photo from last year's Lutefisk Sushi show at the Creative Electric gallery. Yep, that's Max, standing in front of some pages from the graphic novel he completed while attending college.

Not many people complete a graphic novel while attending college and do you know what else not many people do? Get hired by Big Time Attic. In fact, MAX IS THE FIRST.

WELCOME TO THE CREW MAX!

Max had done some terrific friendlance work for us on a couple projects and we love his skill-set diversity so much that we offered him a job. THEN...we offered another person a job to remember to pay Max and move him from contract employee to a "get better benefits than the owners" employee. So..Welcome Sumra!..our new part-time bookkeeper.
Posted by Shad at 4:37 AM No comments:

The "Bone Sharps, Cowboys, and Thunder Lizards" book release party is confirmed for Friday, September 16th from 4pm to 7pm at Big Brain Comics. Jim Ottaviani will be flying in to chat and sign copies of any of his GT Labs books

We'll have more information later, but save the date!
Posted by Shad at 2:11 AM 1 comment:

We were asked to make an updated 50's style logo for a independent grocery chain in Wisconsin. We did one drawing and one treatment and they loved it. We dig it too and will take a field trip to take pictures when they start making signs and bags and stuff.

Anna and I have been dying for a vacation when my mom called to tell us she was coming to visit, had frequent flyer miles, and wanted to treat us with tickets to anywhere in the US.

So we picked a weekend getaway in.... 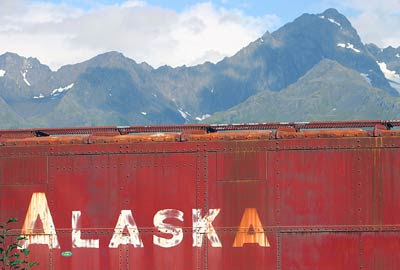 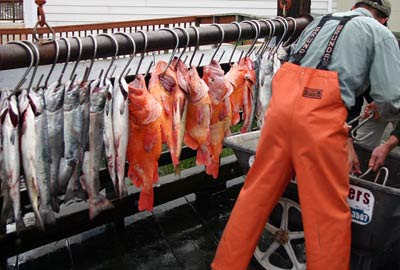 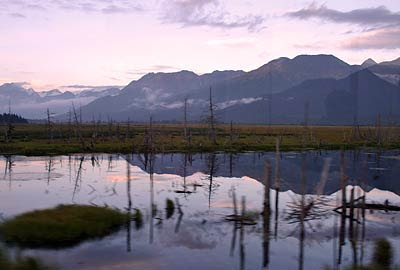 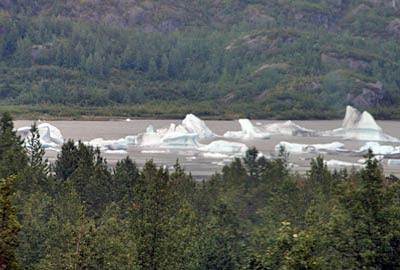 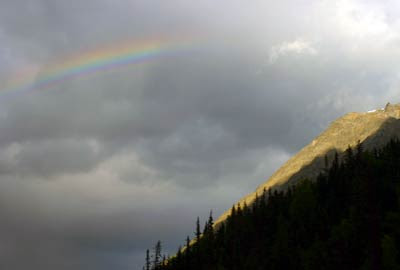 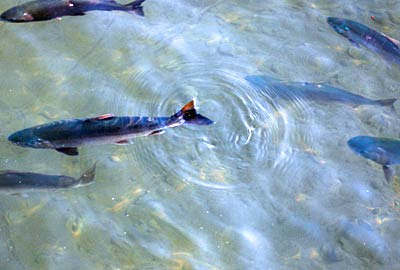 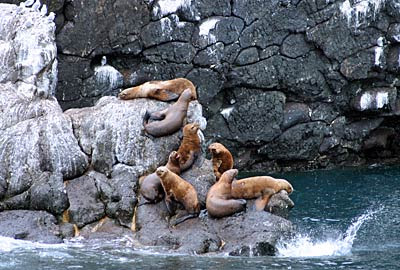 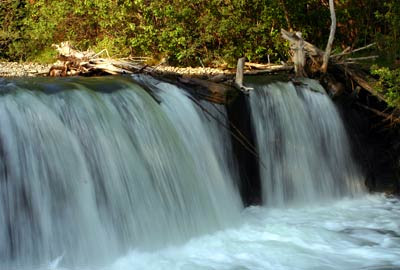 For Those About to Chalk (We Salute You)

Hey artists! BTA is co-organizing a street mural event at the grand opening of a lifestyle center in Woodbury. We're looking for artists to create 7' x 7' murals in chalk on the newly paved streets. Check out www.ChalkArtEvent.com for details, etc. Kevin organized this event two years ago and has been eagerly awaiting another opportunity. For professional artists, this event is a great excuse to 1. get outside and draw for an afternoon (or more), 2. Meet other Minnesota artists of diverse backgrounds (from corporate designer to landscape painter, the majority of previous participants had little to no chalk or mural experience), and 3. Promote yourself and/or your business (bring books, flyers, biz cards, etc.).

Payment for the event includes $70 per half-day shift, a gift certificate to the lifestyle center, and travel reimbursement.

Give Kevin a buzz at info@chalkartevent.com for more info.
Posted by Kevin Cannon at 11:01 AM 2 comments:

Kevin and I went to the Wizard World Chicago show this past weekend and apparently, Providence smiled down upon us, because we were granted non-leper status in regards to our Artist's Alley location. Artist's Alley has grown quite a bit at Wizard World, since it's cheap, fairly well-travelled during the con, and unlike San Diego, not juried. That is to say, you pay your fee and you get a table, no matter how crummy your comic is. Things seem to have changed this year, however, because there were three Artist's Alleys, two of which were on the main floor, and one which was in a side room... up a ramp... on the way to the role-playing game tables... and only kind of visible to passersby. I believe it was mostly to house the C-listers, but convention stalwart Steve Lieber was mysteriously excommunicated to this barren land due to a mixup with his application, and has never been seen again (by me). 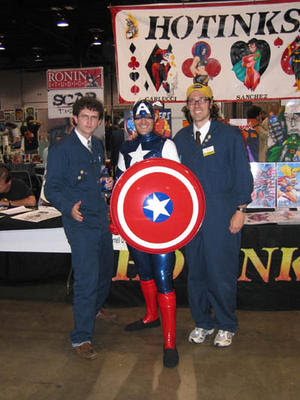 We were about to write this convention off in terms of great costumes; I mean, San Diego and CONvergence have all the jedis, Pikachus, Syphon Filter ninjas, and Red Shirts, but do either of them have a Vinyl Captain America? We found him in our aisle, presumably in search of his archenemy, the San Diego-based Cake Captain America. I asked him if he was a trifle hot in that suit, and he said that he was so hot that every time he would move his hands, streams of sweat would shoot from between the stitching on his gloves. Wow, superpowers! 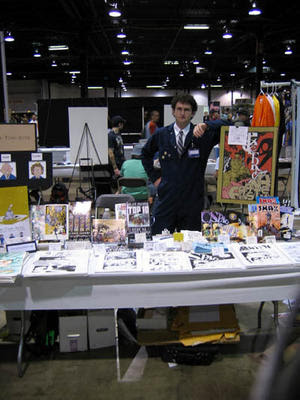 Kevin did a worthy job of manning the booth when I was away to take a picture of the front of the booth. Well done. 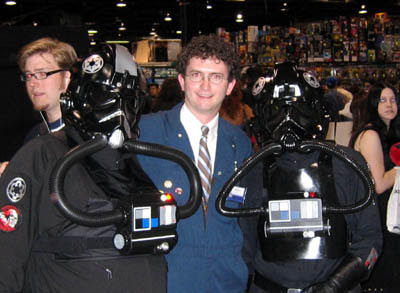 Kevin was then arrested by TIE fighter pilots, who I don't think have any authority here. Somebody alert the sand-covered stormtroopers with the orange shoulder pads! These guys are in their jurisdiction! 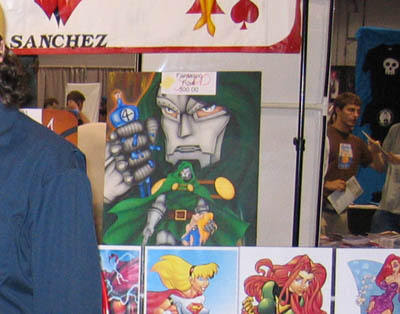 The booth across from us was selling airbrushed paintings of popular comics characters and selling them for outrageous prices. This piece, which you can see over my shoulder, depicts a triumphant Dr. Doom squashing the crap out of Mr. Fantastic and grabbing Sue Storm by the hair while holding a pistol. A marvelous interpretation! And according to their sign, it sold during the show for $300. Likely. So, so very likely.
Posted by Unknown at 6:50 PM 2 comments: 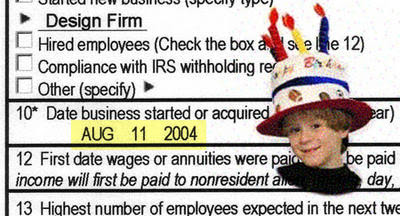 ...And we're celebrating by posting our worst graphic ever! Yes, it was roughly eleven months ago that we wrote "August 11, 2004" on our Minnesota Tax ID forms, thereby arbitrarily creating that most exciting and holy of days. If you've got a free second, how about dropping us a card? Friends and family can write "Happy Birthday, Attic!" and clients can write "Happy birthday, Attic! Here's a thousand dollars!"
Posted by Kevin Cannon at 3:50 PM 20 comments: 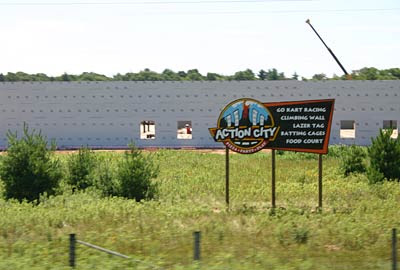 Here's a view of the construction from Interstate 94 and the first time we see our logo beyond the computer screen. Everyone knows I get all mystical about the Interstates, but here's the bottom line: Action City is on a road 1614 miles long. It runs from Billings, Montana to Port Huron, Michigan. Which means anyone in cities like Bismarck, Fargo, Minneapolis, Madison, Milwaukee, Chicago, Gary, and Detroit can hop on the road and drive to our family fun center in only a couple turns. Sweet. It's just down the street... 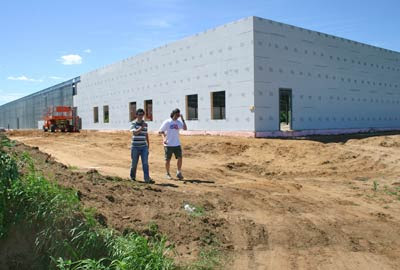 Here's Zander and Kevin catching up to me in the work trailer for hard-hat and blueprint distribution. Mark has made some great decisions regarding the birthday rooms, so we have a fun new area to design. 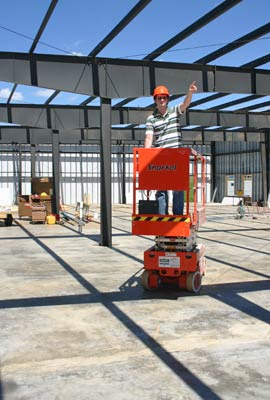 Kevin pulls up on the lifter machine thing. These have a cool one hand joystick controller with a rocker knob for direction. It's like Atari on wheels. You know if Kevin's drivin'... 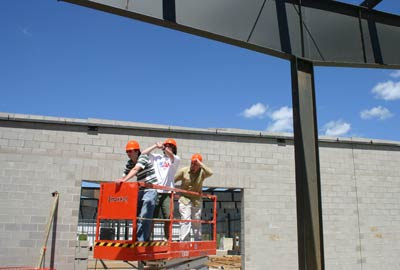 ...we're riding. It got stuck when he started lifting us, which made me all weight conscious. It turned out to be locked on a pre-set height. Nice, pass me the nachos. After driving this around, we had our eyes on the back-ho, but then the.... 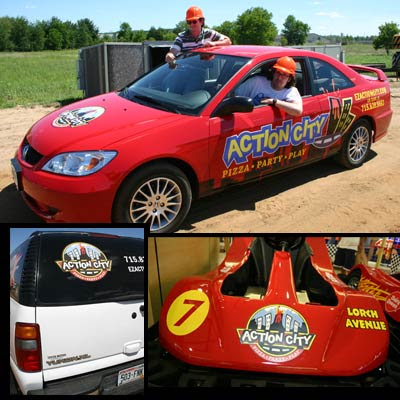 ..Action City vehicle fleet arrived. They're like coolest hot-wheels ever. It just gets more and more real.

This is where the indoor Go-Kart track will go with Zander and Kevin for scale. Click for the huge-o-rama view. We had a chance to race indoor Karts on our research trip to Michigan. Even at only 15 mph, zooming around a tight track was wicked fun.

We probably won't get out there again for about five weeks when they're ready to start building on our designs.
Posted by Shad at 11:47 PM 5 comments:

Zander and Kevin are off to Chicago but I followed them as far as the Action City construction site in Wisconsin. It's coming right along and we had a great time. I've only had 3 hours of sleep last night...so more later. 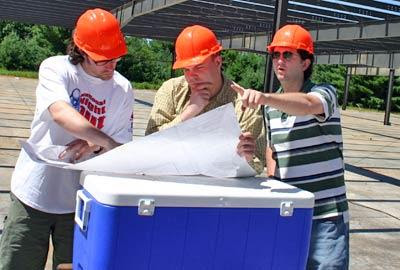 Zander and Kevin will be at Wizard World Chicago this weekend. I'm not going to make it, we've got some tight deadlines on a few animation jobs. Look for the Cannon-Not-Bros in Artist's Alley. They'll have original pages from Bone Sharps, Cowboys, and Thunder Lizards for sale, as well as a ton of art from Smax, Top Ten, and The Replacement God. Ask to see the Uncegila pages, they're pretta'. I'm bummed to miss it, partly because it's a big con, but mostly because I've been dreaming about the delicious chicken dinner that Donn Ha hgs been promising to make in our honor.

I'll be driving with them as far as Eau Claire, Wisconsin to see the progress of Action City and to take photos of areas we need to design. I talked to Mark on the phone this morning; he says that the outer walls are up, the center fire wall is up, and the climbing wall is in. They've also got go-carts and a kiosk up in the shopping mall.

Thanks to King Mini, we have storyboards for the J. Otto Seibold project done. Fun! We're also kicking into high gear on the Space Junk comic for NOAA. The Government has given us a solid press deadline and we're not going to mess around with them.
Posted by Shad at 6:00 PM 9 comments: