Sketching at MCAD -- Part One

The oft-parodied nude modeling session is actually a great way to develop one's artistic chops. Drawing in public (coffee shops, etc.) is fun, but people move around so quickly that it's difficult to focus on anything but basic shapes. With a modeling session you can dig into the subtleties of light and shape, etc.

Britt and Danno invited me to a session at MCAD yesterday, and here are the results:

My drawing materials are similar to what I brought to last month's Opera Sketch Night:

We started out with some quick gestures: 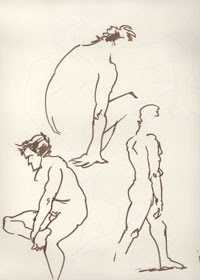 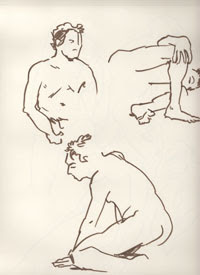 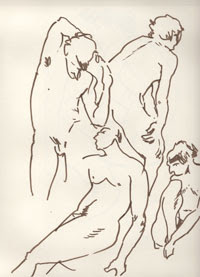 Then we went to some longer 10 and 15 minutes poses: 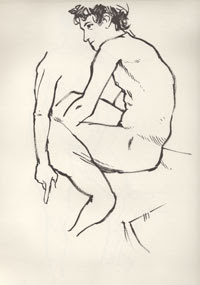 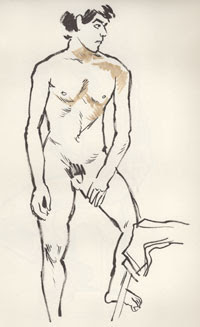 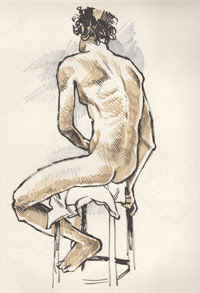 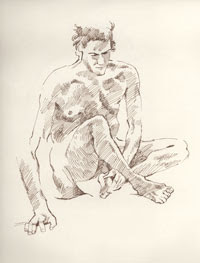 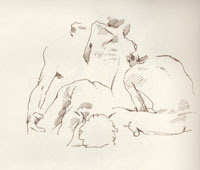 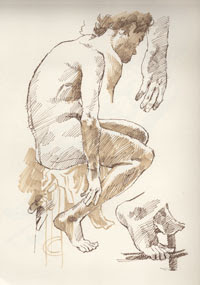 For the longest (20+ minute) poses I twisted Danno's arm and stole his large drawing pad. I'll post those later this week after I get the big sketchpad back from Danno.

The session lasted four hours. In the final few minutes we switched gears and did some quick gestures to cool down. This first one looks like how I feel most of the time: 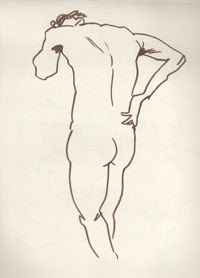 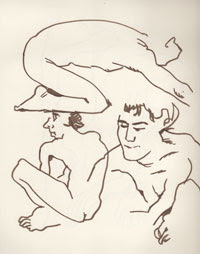 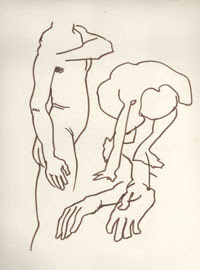 I fully realize I didn't really draw these correctly. You're supposed to lightly sketch in the full form as basic shapes in order to find the figure and then slowly build up the tones and detail. Unfortunately I'm too impatient for that, plus I really like the messed-up look of an oddly proportioned model, so there you go.

Not sure when I'll be heading back to MCAD in the near future, but I'll be hitting up the Bell Museum Sketch Day on Sunday. Looking forward to drawing some prairie landscapes!
Posted by Kevin Cannon at 6:40 PM 2 comments: 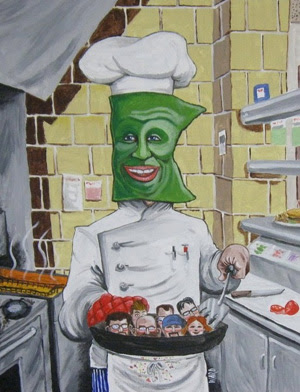 Every year, the kind folks at Altered Esthetics gallery in Northeast Minneapolis invite members of the local cartooning scene to curate a comics-themed show. Past shows include 2010's Lutefisk Sushi: Volume D and 2009's Big Funny, and Big Time Attic has been a proud sponsor of all of them.

This year's show is entitled "Just Add Ink" and will explore the crossover appeal of the comic arts and the culinary arts. Artists are invited to submit cartoons for a "comic cookbook" and will be encouraged to display their original art during the show itself (submission and event details forthcoming).

If you'd like to be included in the planning process, please come to Just Add Ink's first meeting, this Tuesday, March 1, at 9pm at Psycho Suzi's. If you can't make it, continue to watch the Cartoonist Conspiracy website. Shortly after Tuesday's meeting we will post the minutes along with details about the next meeting.

If you have any further questions about any of this, leave a comment below!
Posted by Kevin Cannon at 10:13 PM 2 comments: