I'm not quite as on-the-ball as Kevin is, but here's my 24-hour comic, The Caterpillar Space Force of Robots, in glorious black and white.

I do 24-hour comics as close to the original concept as I possibly can: I don't plan out what the story will be beforehand, write anything, or design characters. Partly this is to stick to the rules; partly it's to keep me (and others) from having high expectations for the story.

At the starting bell, I draw a Pictionary card from the box and use the five words that are on it to launch the story. Sometimes I do know what kind of story I want to tell, (this year I wanted to do a space adventure story) and that does help focus my efforts, but I never think about characters or plot until I draw that card.

This year's comic was pretty grueling compared to previous years, in that I had no idea where the story was going from page to page. I was almost halfway through before I had any ideas of how to conclude it, and so I was not that amped about the story anyway. Reading it now, it's not that bad. Kind of funny. Pretty random.

The Pictionary Card words were: 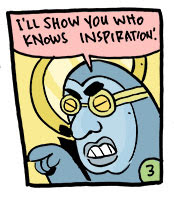 Zander-
I remember you being disappointed when you finished this. I felt the same about my comic, but after putting it aside for a few days and then coming back to it, I felt that it wasn't horrible.
Your comic, however, I think is great! It's a 24 Hour Comic, done in true 24 Hour Comic fashion, with a great build-up to the joke "touch-butt."
Nicely done.

Zander, that was awesome! I never thought I'd see you write 'butt-touch', but now I did, and it was awesome.

I can't wait until our next convention when screaming fans beg you to "touch your butt and say it."

That was terrific! Although the guy with the fat nose reminds me of me...

Hi Zander!
Glad you're still kicking good ideas around!
I've been looking at your work from the start, or at least I thought that's what Replacement God was; is there any way I could contact you about commission work/purchase of Replacement God sketches or pages?
Please let me know at logossun@logossun.com.
Thanx in advance - and here's hoping you pick up RG again!
Denis Pajtak, Croatia