Today is my first day back from an intense, novelty-filled weekend in Iowa. The excuse for heading south was the Iowa Comic Convention (I-Con) put on by the Iowa Comic Book Club. The organizers put on a fun little show, with lots of freebie tables and a big buffet at the end (or least that's what I'm told -- I had to duck out a little early, unfortunately).

The best part of the show was getting to hang out with fellow conspirators Ryan Dow, Danno Klonowski, and Dan Olson. Everyone should check out Danno's latest Manly Tales, which reveals the true origin of Army Shanks. Traffic was a bit slow, which was fine because it gave me an excuse to doodle, something I feel like I haven't done for months. So here are some scans of that madness:

First, Danno's Fleming Hazmat taking a jab at Atlantis Lad. Of course, this would never happen in real life: 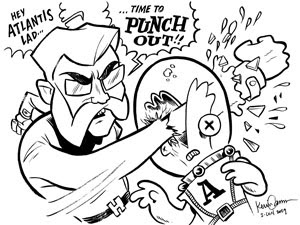 Here's a quick sketch of Shanks Winning the Big Game, inspired by a soon-to-be-revealed project that I've been working on night and day for the last month: 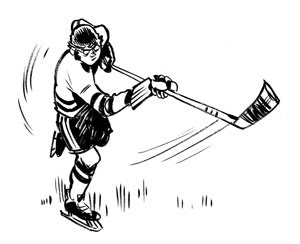 And a Shanks cartoon, created in response to Danno's new Manly Tales epic: 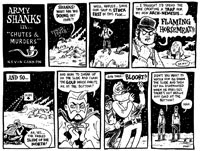 And here's a Klonowski original, which is not supposed to be representative of anyone we met at I-Con: 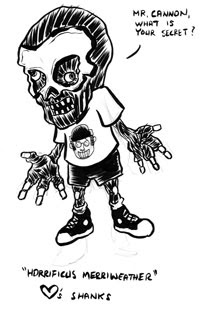 Metromix Des Moines traveled to beautiful Adventureland to record the festivities and I wound up in a few shots. Check out the whole slideshow at desmoines.metromix.com. 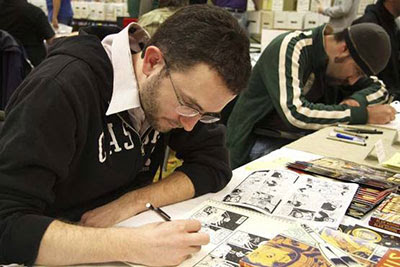 Oh, also we learned that there's another comic convention coming up in Minnesota, but I can't remember when or where. If you want to know you should bug Dan Olson, because he's got it written down somewhere.

The rest of the weekend I spent at the House on the Rock, which I'm not going to attempt to summarize because it would take all day, so please just go yourself. Here's a little taste:

Waitaminute....I thought that you were coordinating that event at The Mermaid? Anyhow, I do have the info: http://epguides.com/comics/

From what it appears, this is more of a swap meet/dealer convention than anything. So, if anyone is looking to pick up some back issues of early 90s X-Force, this might be right up your alley!

I was fired for making too many word conjunctions, or "wordjunctions."

Man, it's been forever since I went to the House on the Rock. I still have vague memories of the Infinity Room.

Ahhh, the drawings are even more wonderful than I remember.

Is this now technically the start of the Great Shanks/Hazmat fued?!?!

Also, was at House on the Rock a year and a half ago...I can see what Neil Gaiman thinks it a vortex.