I'd been posting quotations by my son Jin on my Facebook wall every day via my phone, and people kept bugging me to collect them, or draw them, or do something with them, which was quite at odds with my instinct to not put forth any more effort. But then I had to come up with an idea for Lutefisk Sushi D, and here was one staring me in the face.

FIGURING OUT HOW TO MAKE A MINICOMIC OUT OF THAT IDEA

I wanted to keep things simple, so I decided to make a standard quarter-sheet 8-page mini, and draw it at 100%. Like Kevin said in his post, drawing at size can give you a nice grittiness that, I like to think, lowers expectations to a palatable level.

I decided to grab several of the best quotations from my Facebook page and draw two per page, except for the first and last pages. I also decided that I'd write Jin's dialogue extra big, just to look nice (and to use up space).

In order to make a printable comic original (rather than organizing it on the computer and introducing another reproduction step), I had to figure out how to paginate the pages so after cutting and folding they would go together into a little magazine. So you have to put everything in a crazy order. 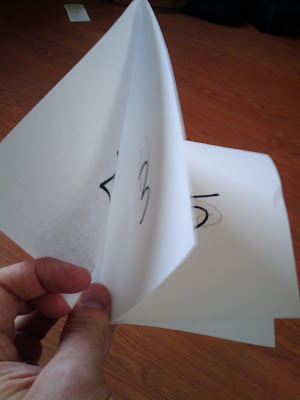 You discover this order by basically taking a scrap piece of paper and folding it in half twice. This represents your minicomic, albeit one with the tops of the pages still attached. You then number each of the pages as you flip through it. After unfolding, you get two sides of the sheet looking like numbers have just been randomly applied. This is your guide for where to put each page. Don't forget that the cover is page 1 and the back cover is page 8.

Now, I've made a lot of minicomics in my day, and I'd say I have above-average spatial reasoning skills, so I winged it a little on this part. This is foreshadowing.

I drew the comic. It took me a day--about 6 hours. I redrew the cover, which I had drawn in brush, because it looked sloppy, and because in the course of the pages, I refined my model for Jin. I used reference for Gamera (a toy) and the flowers (photos on my phone). 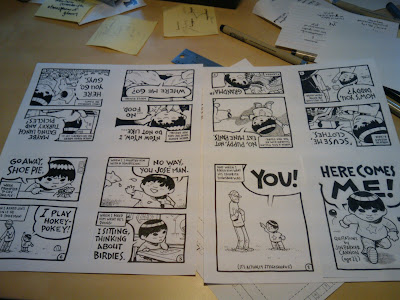 For the final art, after the redraw, I used Micron pens (#05 and 08 for the main outlines, #01 for the details, #1 for the panel borders, and #05 for the lettering, big and small). I pencilled just enough to get the idea across, which for images of Jin was just basic lines, and for things like the flowers, Gamera, the fly, and the clothes meant just a bit more detail and shading where the black areas went. I also filled in the big black areas with small pens (#05 and #01), which is not really recommended, because it wastes ink in those pens and leaves you with tiny white holes in your big black areas. But that was precisely the reason I did it; it gave the comic a rougher look, and reminded people of the tools used. That can be fun sometimes. 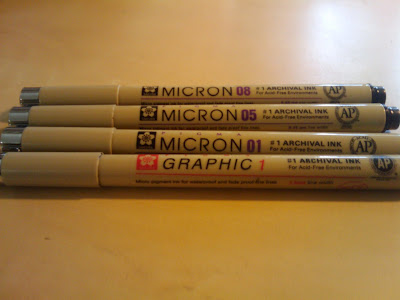 PASTING UP THE MINICOMIC

Since I redrew the cover on another sheet of paper, I cut that out and taped it down over the original cover so as to keep the two-sheet originals just as they were. I was determined to just photocopy the originals. Why? I mentioned the fact that scanning them would just be one more stage of reproduction (and thus incrementally lower the image quality), but the truth here is it's more work. By scanning it in and futzing with it in Photoshop, I'd touch up the edges, then I'd see some other stray pieces of dirt that got scanned in, then I'd find a place where I hadn't erased the pencils fully, and well, I'd rather just leave those mistakes in there and photocopy the original. It's more true to the quick-and-dirty nature of minicomics. MY minicomics, anyway.

I went over to the UPS Store/Mailboxes Etc. that's about a mile from the studio. I like the UPS store because they have decent no-frills photocopiers and a seamless method of storing credits for photocopies. You can buy bulk copies at discounted prices and store them on a tiny key fob, which you then use to activate the copier. You don't even have to talk to the people there; just raise your keyring and arch an eyebrow at them and you're in. It's like the Freemasons. 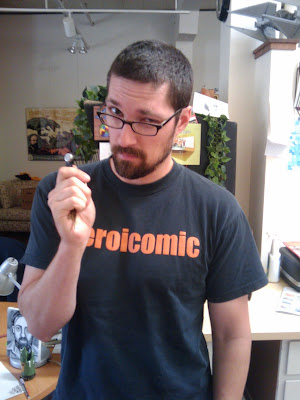 I like to use colored paper for my minicomics because it classes it up a little bit. It also distracts from flaws in the line art or photocopying, like stray dots of black here and there. Chiefly, however, it differentiates each minicomic from the others. When I'm packing them all up to go to a comic convention, it's nice to just grab a stack of blue minis, a stack of yellow minis, a stack of pink minis, etc. One thing that was nice this time was that I was copying my minicomic onto 8 1/2 x 11 paper, of which they have a lot of different colors. Usually, my minicomics are copied onto 11 x 17", which most copy places only have in white, so I have to go to a paper supply place and buy a ream of whatever color I want.

The first thing I did was copy one side on white just to see how the art looks and see if the contrast was okay on the copier. There were a few pencil lines and paper edges that needed to be touched up. Once those were fixed, I made all the copies I needed for that side on colored paper. Before loading them into the tray to copy the other side, I needed to quickly test how the paper feeds into the machine. I draw an up-arrow on the top sheet in the tray, then copy. By noting how that up-arrow corresponds to the new image, you can know in what orientation to put the one-sided sheets.

Then, just to be certain, I copied a full dummy-copy, front and back, then cut it and folded it. Ah, here's what it'll look like. I was just thinking that this step was overly cautious when...what the crap? These pages are out of order! I'd actually screwed up the order of the pages. On like my 15th minicomic! Luckily for me, the order of the content on the pages didn't actually matter, so I used whiteout and changed the page NUMBERS and refrained from kicking myself until I was somewhere more private. So let that be a lesson to you. Do not wing it.

Once I got all of this sorted out, I finished the copying and cut the sheets (4 at a time, which I had non-scientifically calculated to be the maximum allowable before messing up the cut), paid the people for the colored paper, and got the hell out of there.

COLLATING AND STAPLING THE MINICOMIC

Once the comic is cut, you need to put the two smaller sheets together to make a comic. Doing this for more than 20 copies is a pain, so get ready. What I like to do is fold all of the papers first. Make sure you're folding them all the right way. You can do this in big sections, like 20 sheets at a time. They don't have to be creased, just folded a little bit, in the right place. Then, when you have both stacks folded, sitting in two little tents on your desk, you can quickly put them together, crease them, and set them in a stack. This is a seemingly endless process. You may want to listen to some music or get some serious thinking done about your life.

Once you have all of your books folded and in a stack, you can go through and staple them. Obviously, you could have done this as part of the previous step, but I prefer to separate them because when you only have a few little movements (grab first sheet, grab second sheet, put together, align, crease) you tend to get that muscle memory involved sooner, which gets the process moving pretty fast. Your mileage may vary. 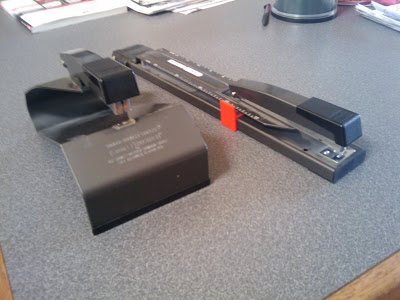 As Kevin mentioned, a regular-sized stapler isn't big enough to accommodate even a 4 1/4"-wide minicomic, so you are going to need to find yourself a long-arm stapler or a booklet stapler. We have both at the studio. The booklet stapler has a little "roof" for you to put the folded sheets over which ensures that you always get the staple right on the spine. That's nice, and it speeds up the process immensely. If you're making a minicomic that's really wide (some of mine have been 5 1/2" x 8 1/2" in the past) you'll have to curl the pages a little bit to get them to fit, which isn't so bad, but in that case a long-arm stapler may be better. 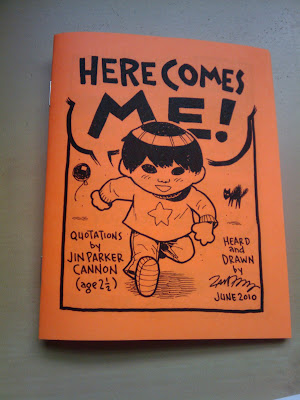 Et Voilà! This minicomic will be part of the Lutefisk Sushi D Bento Box. Come one, come all, to the opening gala on August 6, 2010!
Posted by Unknown at 11:07 AM

Leaving the computer out of the comic book production process?

Still . . . I am looking forward to reading your comic of Jin's wit and wisdom. Looks cool!

I can't wait to read it! Not getting the daily Jin quote is one of the things I miss about facebook since I deleted my account. It must have been awfully hard to cut it down to eight pages.