I've mentioned David Mazzucchelli before, but I can't really state strongly enough how much I admire his work and how much I looked at it (particularly in Batman: Year One) as the absolute epitome of thrilling, dramatic comics. 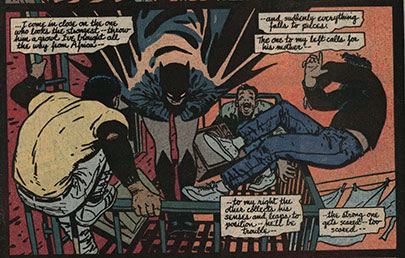 The most exciting thing to me about his artwork was the fact that there was literally not one more line than was needed to get the point of the panel across. No extra hatching on faces, no extra detail in backgrounds. You could read every panel in seconds, but it nonetheless slowed the eye down to tell the story at the right pace. 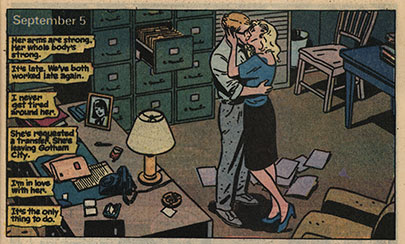 This panel is a perfect example. Every detail serves the story. From the open filing cabinet drawer to the file dropped on the ground, and the photo of his wife on the desk, there is no need for the captions to say anything about what is actually happening. The image tells you the whole story, and any words can address what is not in the picture. It's night, and she's requesting a transfer. Beautiful. 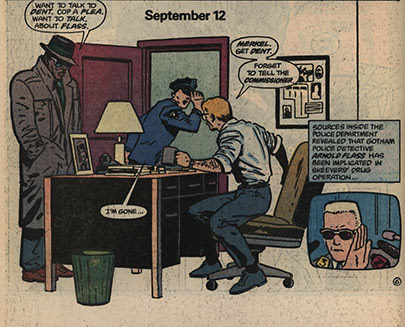 Mazzucchelli's willingness to leave out panel borders and let the page breathe is something that I never really caught onto when I was younger, but looking at it now really opens my eyes. This isn't the cheap trick of just blasting out big explosions so that they bleed off the page; all of the elements of the panel are still within where the panel borders would be. It's a matter of making the page a little more open and by dropping out the color of the walls and floor we instinctively focus on the characters and what they are doing rather than where they are. 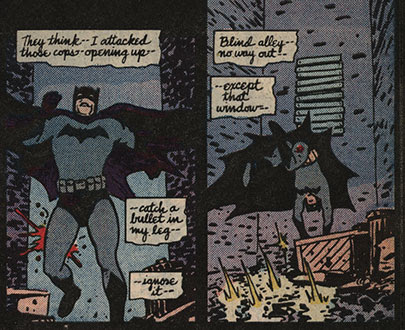 One of the things that struck me about Batman: Year One was that its world, unlike other Batman comics, was a mundane one, and Batman as a character was human-sized, vulnerable, and therefore unbelievably awesome that he could do the things he did. He didn't have batcables that could just whisk him away to wherever he wanted. He had to hoof it sometimes, and sometimes he got injured. Even as a hard-to-impress 13-year-old, I thought that something as commonplace (in comics, anyway) as Batman flipping through a window or kicking a rickety old pillar in two was completely gripping, and it was all due to the fact that this artwork firmly placed it in the real physical world. 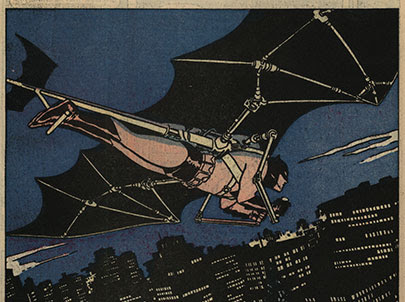 I met David Mazzucchelli for the first time about two months ago at the NY Comicon, and he was absolutely as nice as can be, but almost more importantly, he was articulate and interested in discussing the craft of comics and seemed genuinely excited about his work-- not as common a trait as you'd think for comic book artists at a convention.
Posted by Unknown at 1:20 PM

Came across this entry by accident. Fantastic post though. Year One is one of my all time fav graphic novels :)

I could read Year One every day except that I've memorized it and it would be like listening to white noise at this point. It's a nice feeling to realize every once in a while that it's been five years since I've read it and that I could actually experience it again.

I came across this by accident as well, really glad I did. It's nice to hear someone else talk about the work of people you respect, sometimes they point out things you missed and remind you why you love it in the first place.

"Batman Year One" is probably the best graphic novel that I've ever read. It is both brilliantly drawn, and meticulously written. The Miller/Mazzucchelli team cannot be beat. When I read another Batman novel I feel a want for something more to the taste off M/M (Miller/Mazzucchelli). That is the only downside to Year One. All other Batman books just can't compete. I wish that there could be another amazing M/M story to slate my thirst. Has Mazzucchelli done any other Batman stories? I'd like to know.

I don't think he's done any other Batman stuff-- I think he went right to Rubber Blanket after that (which is well worth checking out), but his and Miller's Daredevil: Born Again is just as good as Batman Year One.

Mazzucchelli's Daredevil comics right before Miller started writing again are uneven, but his artwork and storytelling are fantastic and well worth a look.

Pardon the redundancy, but I also came across this page by mistake; and I'm very glad I did. This is one of the best -- if not the absolute best -- graphic novel I have ever had the pleasure of reading. The no-BS look at Gotham City reminds me of dystopian urban settings in films like Taxi Driver, Se7en, and Fight Club. I feel that the films should have had a meaner portrayal of Gotham, the one flaw I found with both movies.

But with regards to the "M&M" combination -- it's about as good as it gets here.