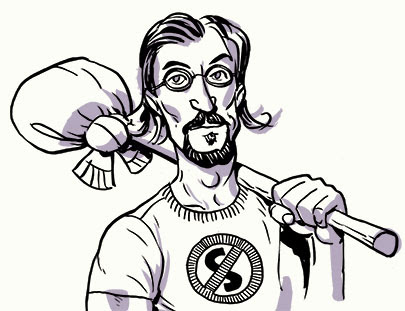 Here is a person who is a bit of a personal hero of mine. Reinhard Engels created the No S Diet and the Shovelglove Workout, as well as a number of other systems at his network of websites, Everyday Systems.

The main reason I think he's cool is that he has a very appealing philosophy of simplicity in his ideas, all wrapped around an even-easier-to-understand metaphor, pun, or visual image. To a person who multitasks so poorly as to almost consider it impossible, simple ideas that don't need to be thought about very often are like gold. Heck, you can tell his ideas are simple just by going to the websites; they're delightfully unencumbered by design.

I've been doing the No S diet for about a year and a half now, and I lost about 10-15 pounds (I wasn't that heavy to begin with), and best of all, I no longer consider myself to be on a diet. I've also been doing Shovelglove for a couple weeks, and I'm ever so slightly burlier. What I appreciate more than any particular progress, however, is that there's a built-in set of rules that are simple, precise, easy to follow, and easily scheduled in. As he mentions on one of his podcasts (also charmingly low-tech; you can hear his cats in the background), habits are there to reduce your time, effort, and thought, not increase them.

Last of all, for a de facto (but not self-proclaimed) diet guru, he's refreshingly self-effacing. He's not the sort of diet coach that pumps you up to make a herculean effort to get skinny for swimsuit season, he's the guy saying, "I was lazy and fat; here's a ridiculously simple way you can be just a touch less lazy and gradually lose weight (or get stronger, or drink less, etc.)." Check out his site. You may find a system that makes sense to you, as well.
Posted by Unknown at 11:10 AM

The dude is brilliant because he understands how to build habits that achieve substantial progress over time.