Every year, Game Informer, the world's best video game magazine, has an April Fool's section in their magazine that contains all the rude jokes about video games that, presumably, they have been waiting all year to tell. This section, "Game Infarcer", has a cover with some video game-related gag, and we've been lucky enough to draw it for the last three years!

This year's entry is "Assassin's Creek", a parody/homage to the video game Assassin's Creed and the TV show Dawson's Creek. Click on the image below to see it big, and without the logo. 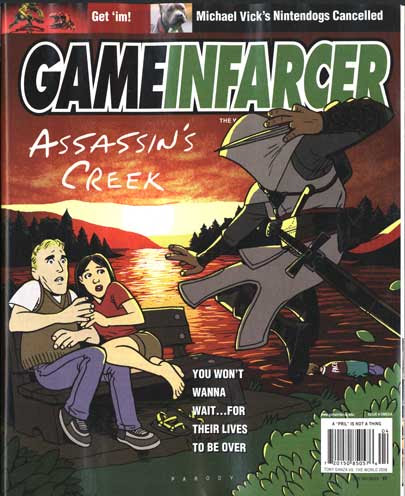 Because of the way things print in magazines, it looks like they had to take out the layer that darkened ol' Dawson and Joey (and poor Pacey) so that you could tell who they were. That's cool.
Posted by Unknown at 10:18 AM

My wife loves Dawson's Creek. She would be very disappointed if Dawson had his head removed. Just to be clear, I am condoning this action.