Well, completely coincidentally I drew the last line of Far Arden at the stroke of midnight today. 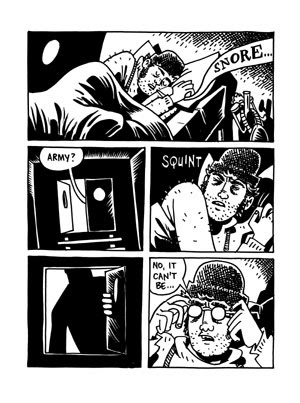 Thanks so much to the devoted core of fans who have been reading the book and commenting on the blog. If there's one thing I've learned throughout this nearly two-year project, it's that while I don't need rockstar readership numbers to keep motivated, it is helpful to know that at least one or two people are genuinely looking forward to the next chapter.

I have to say thank you to Steven Stwalley, who initiated this whole project in Fall 2006. There are always a hundred things that COULD occupy my free time, most of them unproductive, so thanks, Steve, for waking up my competitive side by laying down a big fat challenge. I regret not being able to do twelve consecutive 24-hour comic challenges in a row, so I'm hoping the extra 62 pages makes up for it.

For the record, here's the final stack of originals, next to a glass of scotch (for size reference). In honor of finishing Shanks, I stopped by ol' Lowry Hill Liquor and picked up a bottle of Dalwhinnie. I was actually hoping to pick up a bottle of Sheep Dip -- which has overseen much of the creation of Far Arden -- but they were out. Such is life. 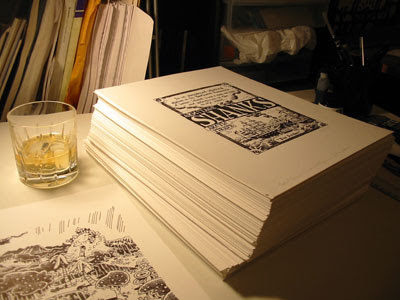 Definitely not a Hollywood ending to things. :(

Congratulations and thank you. When can I buy the tpb?

So, when are you gonna get going on the next one?

I had the same question as Jim... Is this coming out in TPB?

Thanks, guys! The plan is to have a small run of tpbs available by Sushi C (early May). I'll definitely post any details on the blog when I get them.

That first panel in the kitchen, was absolutely stunning.

Can't wait until the trade!

Fantastic! I read it and immediately re-read the whole thing. Congratulations on your amazing accomplishment! My fez is off to you.

It's genius. A monumental achievement, and a character to base your life around.

Thanks dudes and ... uh, no dudettes yet.

There's one now! I was really excited to see you posted the last chapter. Great stuff! It was pretty grim, but I still thought it was great. I've been telling everyone I know to get online and read "Far Arden."

Wow. That was just fantastic. I read that last bit yesterday, and like the last chapter in a book you don't want to end, just had to re-read it again today.

I've been quietly following this for a while, and was really happy to see the final chapters posted. Congratulations on finishing this hefty tome. I look forward to the eventual trade run.

Well.. i'd never been on this site before.. never really read any online comics.. but I saw this and decided to read the whole thing.

Just finished, and wow! That was brilliant! I'll be looking out for more of these, amazing work!