UPDATE:  I've just written about the situation in another post;  you can find it here.
UPDATE:  I've been given an email address that fans wanting to make themselves heard about Top Ten continuing can use to contact Wildstorm:
AskWS (at) dccomics (dot) com
Let's let them know Top Ten has some fans out there!  But ask nicely, won't you?  For me? 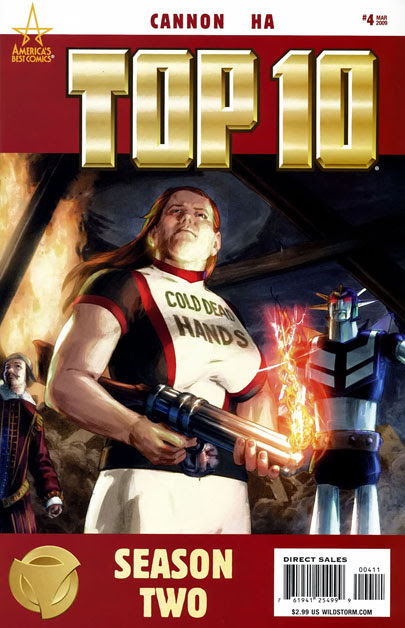 This week saw the release of Top 10 Season 2 #4, the supposed end of the 4-issue series.  As people read it and wonder why all the plot lines are not resolved, here is a semi-official statement from Wildstorm through me my take on the situation:

The series was originally conceived as an 8-issue story with 2 standalone specials.  The first special, focusing on the courtroom dramas in a superhero city, is coming out next month with art by Da Xiong.  Wildstorm and DC are looking at the sales and response on these 5 comics and using that to determine how to continue the series.

We're hoping that the responses to the special will be good so that we can continue this series, which seems to be relatively well received, critically.  Here is a new review of #4, from Comic Book Resources:
Top 10 Season 2 #4 review
EDIT:  Wildstorm has not made any official statements on this matter, and to my mind the decisions that they made have been understandable.  I apologize if I portrayed them to be unreasonable or unresponsive.
EDIT:  Rich Johnston has put out a call to save Top 10 on his Lying in the Gutters column on Comic Book Resources.  Thanks, Rich!
Posted by Unknown at 11:30 AM

Great news! I love what you guys have been doing with the comic and hope to put a lengthy Season Two right next to Season One.

I just finished the 4th ish and am concerned about the indefinite status of this unique and wonderful series.

My assumption is that sales have not been great and it won't be continuing. Please tell me that I'm wrong!

It's really crappy to hear about this. I'd been following Top 10 and thought your issues were as good as Moore's.
I hope you get a chance to finish it.

Picked up and read the special yesterday. Interesting and enjoyable but did I miss a transition where Girl 2 became a public defender?

Regardless, hope this isn't the end of Top 10!

I've been so happy that you guys have been continuing Top Ten - my favorite of the ABC line (and probably my favorite comic being printed right now). Is there somehow we can let Wildstorm know that we'd like them to publish the second half (you know, besides just buying the comics)?

Ah, okay, I calmed down and did some more looking around and finally came to this post.

Sorry to come on so strong!

This clears it all up for me.

I sent an email to the address you posted, asking (politely) that they continue with the rest of the story. Is there any way to find out how sales went, so we'll have an idea of whether we might see more?

I sent an email, too. I really enjoyed the story till now.

I already sent an email, but I have to say it should have been announced that the sales of the special would determine wether the season was finished. If I'd known that, I'd bought the special (I didn't because I'm not that interested in Girl 2).

Just popped off an e-mail to WS. I really hope you guys can work out a way to give Top Ten a finish it deserves.

Screw this, this is the epitome of a bait and switch. Mr. Cannon you and Wildstorm/ABC have just ensire I will never buy another Top 10 book ever. Way to go.