I Wish Someone Would Invent: A Desk-Size Tablet

This is more about technology than about no one thinking about it, but I wish someone would invent a floppy pressure-sensitive sheet that could roll out on a drafting table and input drawings into a computer. Like the Wacom tablet, it would be a simple way to draw directly into a computer program, and skip the scanning step. 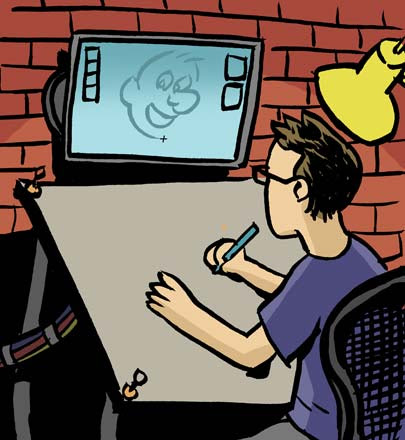 In this case, the tablet would be (obviously) much larger than the 4x6 to 9x12 area that most reasonably-priced tablets offer, and allow the artist to be more expressive with his or her arm movements.

Now, in the wake of the Cintiq tablets (large rotatable monitors that you can draw on with pressure-sensitive pens), there's the thought of making a sheet like the one above that doubles as a monitor as well. I'm sure people would make it if they could-- I can't imagine a graphic artist that wouldn't at least want to check it out. 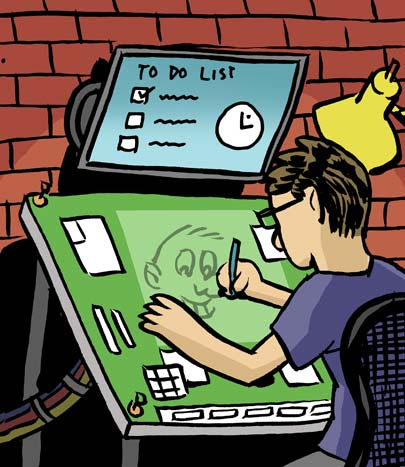 You could use it as a regular desk as well-- it would keep your spreadsheets organized, and your desk could be laid out like mine is now ("I think that's in the upper right hand corner, under the tape dispenser") but with the help of a computer processor to keep everything organized behind the scenes.

Again, I know that people would invent it if they could possibly make it work and make it not cost ten million dollars, so don't worry, guys. I'll wait.
Posted by Unknown at 11:34 AM

Couldn't you buy the Cintiq monitor and use some carpentry skills to mount it flush into the center of your drawing table? At 17" x 12.75" it's large enough to cover the 10" x 15" official american comicbook bristol size if you set it so it's sides are up and down and it's top and bottom are left and right.

You'd probably have to be careful not to lean too much on it, but it sounds like it would work... though it wouldn't be as seemless as your drawings indicate.

Hmm. So... the pen should be pressure sensitive and you should have some receivers you can attach to the table so you can triangulate the position of the pen. Given that the surface area is so large and the target is so small - that would seem to be the most cost effective method for doing this and not cost a million gazillion dollars. Googling for reference:

Even more better. All that's missing is the pressure sensitivity.