I first read Matt Feazell's work on a recommendation from the comics shop I frequented as a lad in Lakewood, Ohio in the 80s. It was a minicomic, probably 80 pages all bound together, and it was the adventures of a stick figure with two dots for eyes and a straight mouth that went off the side of his head named Cynicalman. He didn't want to fight crime; it was his day off. 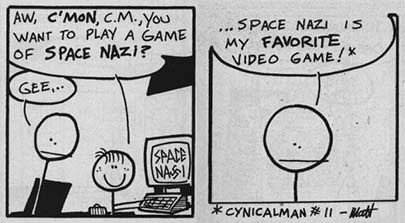 Even at the time, I was very much into art. I loved the really detailed artists like Brian Bolland and Michael Golden, and I really appreciated complex, multilayered comics like those done by Bill Sienkiewicz. But there was something about these little stickfigure minicomics that fascinated me. They were easy to read (they couldn't have been THAT difficult!), and more to the point, they were funny and fast-paced. Since they were stripped of all the noodling around that you have to do to make complex, realistic artwork, they HAD to be funny, and they HAD to be fast-paced, otherwise what would be the point? 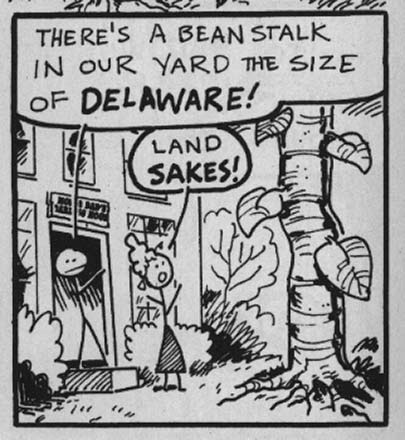 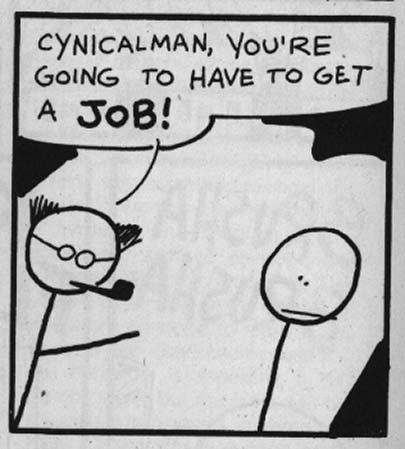 The stories were also something that appealed to my young self in that they were parodies of the standard notions of comic book superheroes. Cynicalman wasn't even really a superhero, except that he had a superhero name, and so everyone kept asking him to help them. The scope of the stories would range from tiny (getting up in the morning, or eating at the vegetarian restaurant) to huge (making a quiche in the Metrodome to satisfy an attacking Godzilla), and the ever-increasing cast of characters really made me feel as if this universe of little stickmen and -women was a worthwhile place to spend time. 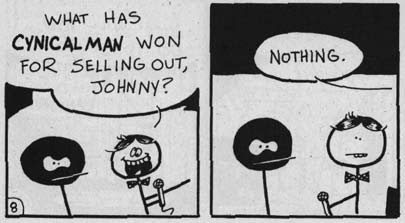 Stupid Boy, CuteGirl, Antisocialman, Dr. Pweent, Spud and Ernie (Cynicalman's fan club), and Mr. Spot were as real as any fully-rendered character at DC or Marvel Comics to me. The fact that the comics were small also meant that I could read them in different places than other comics. There was something about how personal reading them became-- particularly since not many of my other comics-reading friends could really get into stick-figure comics. 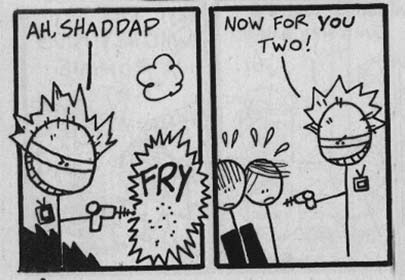 Click image for whole sequence
Posted by Unknown at 8:47 AM

I was also a big fan of his more rendered work "ANT BOY" was I was a kid.
"ANT BOY" appeared in "CAPTAIN CONFEDERACY" as a back-up feature, and even had an issue or two of its own.
Start your search engines....

Wow! I had no idea he's been around so long. I met him at the last Thunderbird FallCon and made some stupid suggestion about getting a mimeograph machine and having visitors actually make their own copies of his comics. He was swell and didn't tell me to shut up.

Geez, I thought he HAD done the mimeograph at one point.

Matt is not only a god as Scott McCloud states in Understanding Comics, but a hell of a nice guy. And a pretty great dancer as well.

If you are in the mid west, find a con and get some of Matt's work.

the theme of the influences is more important during our teenage years, in that time our parents wathc it carefuly who are our friedns, what kind of video games we play, you know you already pass for that, I remember when my father found a sample of Viagra online under the bed of my oldest brother, what a mess.

Comics is perfect because each time I read comics I get fun actually once I read a comic related to viagra online it was interesting because nowadays there are some comics related to that.