Cartooning Tips and Tricks: Committing a Visual Subject to Memory

Let's say that twice a year you find yourself having to draw an elephant. Maybe last September you found yourself drawing a political cartoon and wanted to caricature the Democratic party. Then, a few months later, a six year old begged you for a "totally sweet" elephant (riding a snowboard).

If you're like me, you would have run for the nearest computer to do a Google image search. But the truth is, you don't always have a computer with you. So until someone comes out with an image phone, or "i-phone," we're all going to have to get better at committing to memory some of the things we could normally just look up.

The technique below could be described as "learning by humiliation." That is, you feel humiliated when you realize how little you know about something you've seen your entire life -- like, say, an elephant. Try this technique, and see if it doesn't help you stay away from Google image search...

STEP ONE: Pick Your Subject
Pick a subject, but don't look at photo reference first. Maybe it's an animal, maybe it's a person's face, maybe it's a cartoon character. You can see a vague image in your mind, but how well does that image translate to pen & paper? 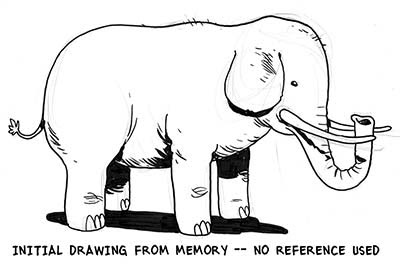 Draw directly from your mind, without any visual reference around you. Try to draw your subject as accurately as possible. Think about each line while you're drawing it: which parts of the subject are you most comfortable with? Which parts are giving you the most trouble? It's important here that you really concentrate on and struggle with the unknown parts of your subject. 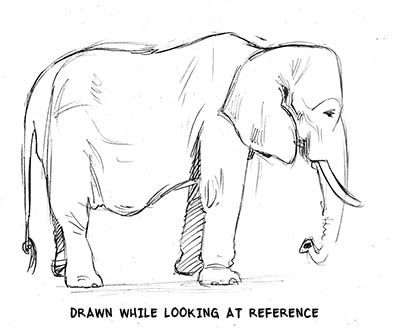 Okay, NOW run to your computer and find the thing you're drawing. Print it out. Put the reference and your Step Two drawing side-by-side and compare. If you really concentrated on each line, you should feel three different things about different parts of your drawing:

"a-HA!" for areas where you had no idea how to draw it, but you struggled and tried to make an educated guess. You may have drawn it wrong, but now you know the right answer!

"WhaaaAAA--" for areas that you thought you were comfortable with, but it turned out you were off. 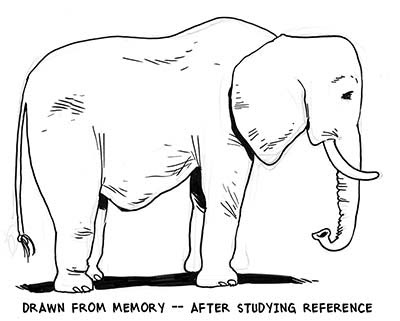 This may seem tedious, but put the visual reference away and draw the same exact subject. This time use the memory of your experience with Step Three. You should remember which parts of the drawing were correct, and repeat those, and remember which parts were off, and do your best to get them right this time.

STEP FIVE: Look at Visual Reference Again
Hopefully, you're spot on. If not, why not? Maybe the details are right, but the shape is off. If you're drawing a character, perhaps you got the eyes in the right spot but the line weight is all off.

NEXT STEPS:
If you're a perfectionist you may want to repeat Steps Four and Five until your drawing is beyond reproach.

For the rest of you, try repeating Steps Four and Five in a day, or a month. Notice what deteriorates in your memory of this specific subject.

BONUS STEP:
Simply to impress people (or piss people off), use these steps to memorize something extremely complicated and unnecessary. Maybe it's a portrait of Queen Elizabeth, or the complete rigging on a clipper ship. Who knows, maybe this completely random visual knowledge will win you points with the nephew ... or liven up a dull party.

Maybe it will save your life.
Posted by Kevin Cannon at 6:33 PM

In the game Brain Age for the Nintendo DS, there is a little challenge that comes up basically at random where you have to draw something without reference and they then show you a real picture of whatever it was. Also humiliating. But kind of fun.

One other thought on this notion of drawing not-from-reference: I find that it's nice to have certain things that you always know how to draw, and most other things you leave to Google Image Search. I memorized these things:
1. human anatomy
2. a generic car
3. business suits
4. horse anatomy
5. the Times font
6. a couple kinds of rooftops
7. a generic chair
8. a generic tree, and
9. mountain ranges

That covers most of the things I have to draw over and over, and that I throw in the background (and would hate looking at reference for).

Your mileage may vary.

This will impress people at parties: