Today the Cannon boys have inked a Jack Kirby Thor page once delineated by Vince "The Prince" Colletta. As Adam Koford (aka Ape Lad) says in his introduction to this Flickr pool:

"If you're a fan of Stan Lee and Jack Kirby's epic run on the Mighty Thor, you've heard (and maybe even share) the complaints about the inking style of Vince Colletta. Well, now is your chance to put your ink where your mouth is and have some fun re-embellishing a select page of Kirby's dynamic artistry!" 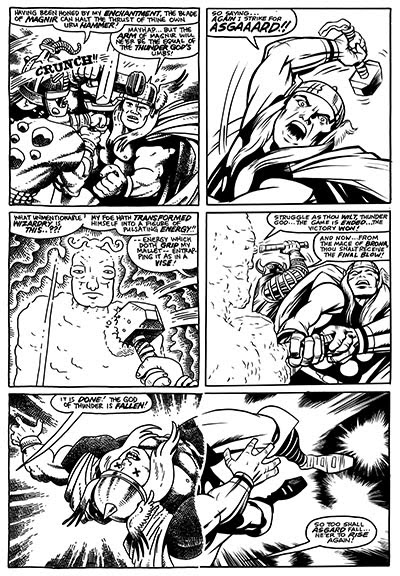 I heartily agree with the notion that one should earn the right to criticize by at least giving it a shot oneself. If nothing else, you learn something. So we boys have learned something today. One, it's fun to ink Jack Kirby. Two, if Vince Colletta inked as fast as people said he did, the guy must have been a genius. Three, that's lovely Elizabethan English that Norse god inhabiting the body of an American doctor is speaking. Four, Zander couldn't bring himself to "re-imagine" Kirby the way Kevin did. I mean, he even slavishly kept to Sam Rosen's lettering!

Give it a shot! There's a non-photo blue image up on the site to download and print. And check out all the other versions up on Flickr; they're pretty great.
Posted by Unknown at 1:28 PM

Did anyone come close to the Colletta version, quality wise?