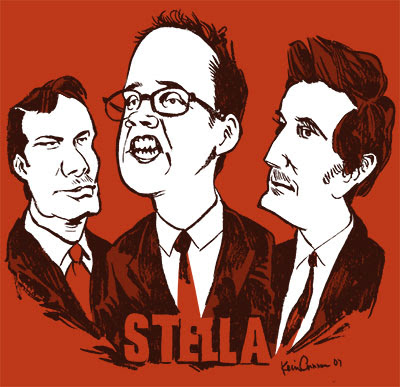 Here are two truisms about Stella:

Or maybe you will get it if you think that comedy gold means using a "shattering glass" sound effect on a broken trowel, or having a park ranger refer to the female deputy as "the female deputy."

A quick history (as I understand it): Stella is a three man comedy troupe that started as a stand-up act and moved into television and films (although the films aren't technically "Stella," but involve all or most of the players). The triumvirate (shown above) are (L-R) Michael Ian Black (currently a Sierra Mist spokesmodel), David Wain (director of The Ten, coming out soon, presumably the big screen sequel to ABC's Emmy award-winning series "The Nine"), and Michael Showalter (currently starring on the really small screen in The Michael Showalter Showalter).

Watching Wet Hot American Summer (Wain and Showalter's camp masterpiece) a few years ago with my roommate Zach and his friends was the closest thing I've had to a religious awakening. After accepting WHAS as The Truth, I then converted my brother, who then converted most of his high school friends. I admit, I got a little over-zealous back then, and even hid "WHAS" in braille in a homecoming t-shirt commissioned by my brother's high school. That furvor culminated in a short friendster message conversation with David Wain himself, an exchange that boils down to:

ME: Mr. Wain, I really enjoyed WHAS.
WAIN: Thanks.

I don't normally get this stupid about movies or directors, so I thought Stella was a natural choice for this "Fan Club" category that Zander devised.
Posted by Kevin Cannon at 9:25 AM

Sign me up for this "fan club" of yours. It was a sad that they were pulled from Comedy Central after one season. I believe that all members of Stella were part of the MTV comedy sketch show The State, which also includes various members of Reno 911.
By the way, nice image.

Your readers and friends in NYC might be excited to hear that Stella is getting back together to host the huge New York Magazine 40th Anniversary Event on Oct. 10th. http://nymag.com/nyxny/40th