Just wrapped up another successful MicroCon, MNCBA's yearly spring show. Although it didn't feel much like spring inside or out, everyone seemed in higher spirits than normal.

While Zander and I spent most of the show selling books and promoting Lutefisk Sushi, I took some time out to battle, defeat, and ultimately befriend a Decepticon. Unlike most of the phonies who come dressed up in costumes, this was the real Soundwave: Speaking of Sushi, Ryan Dow made this awesome iron-on Sushi shirt. He bought the orange shirt and the iron-on kit at Target. 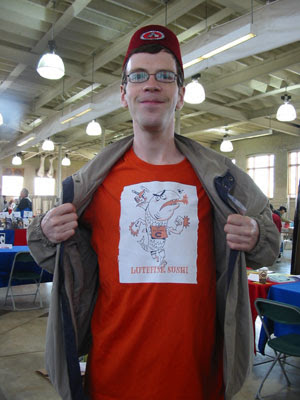 Speaking of DIY clothing, Matthew Kriske showed up in shoes that he had painted himself. He's got a "name who's on my shoes" contest going on at his blog. Contest or not, we're just glad Kriske's finally wearing shoes. 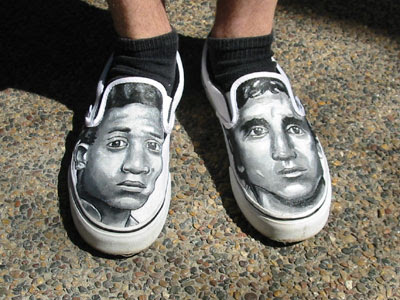 Speaking of Kriske, you can see his hilarious mustache story in the newly released "Muscles and Fights: Volume III." Bud Burgy and Amado Rodriguez printed up 10 copies through Lulu and will hopefully print up many more! I overheard some talk of Diamond's Coffee Shoppe hosting a M&F art show during Art-a-Whirl ... but you'll have to check the M&F website for more info. From L to R, Zander Cannon, Dank! (aka Danno), and Bud Burgy: 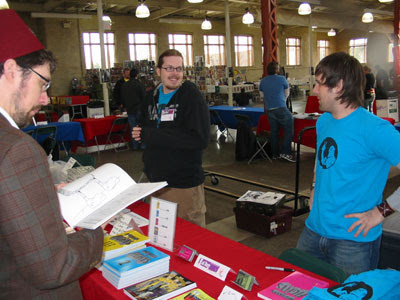 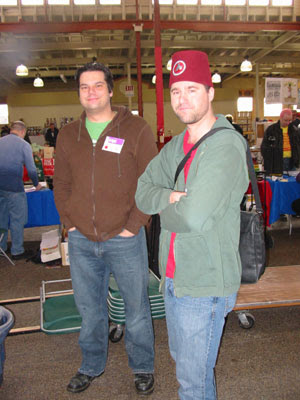 Steven Stwalley setting up for the show. He spent half the show behind his booth and the other half rooting through bins and scoring cool old comics. Curtis Square-Briggs with his own score, the best comic book cover ever made: 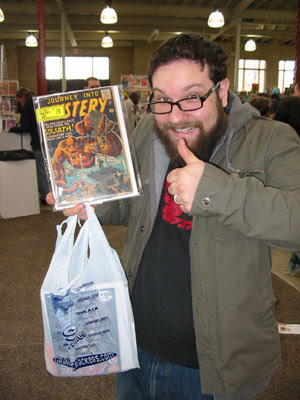 Finally, Kriske shows some gorgeous Sam Hiti sketches. Interested in learning comics from a master? Hiti will be teaching a comics course at MN Books Arts starting May 7. Not sure if there are spots left, but you can check out details here. 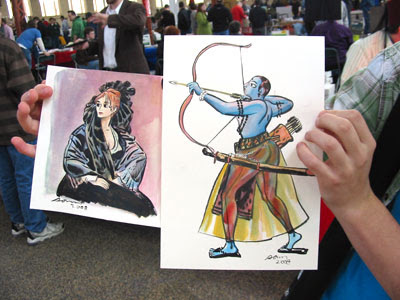 Dude... how did you get these pictures up so fast?

Did you figure out the green/bold thing?

Yep. Black is decepticon and green is autobot.

(I like how creepy my hands look, by the way.)

It was cool to see you guys

I'm jealous. I didn't see any Transformers. But I did bump into Indiana Jones. Next year I'm wearing spandex.

Did you guys see the ghostbusters?! I thought it was just a movie! that #*$% is bananas.

What an Attractive dress! I never see this type of embroidered dress till now, I also want to wear this and I always try to wear different type of dresses and Embroidered Uniforms is one of my favorite dresses, you can try.