I Wish Someone Would Invent: "The Act" for Consoles 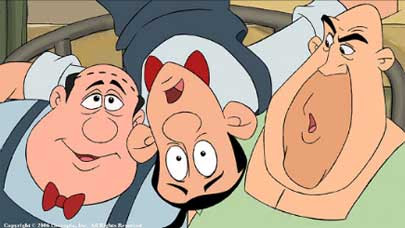 I stumbled recently on a site that spoke about an extremely ambitious project by a video game company named Cecropia. Their game, intended to be a bar arcade game, is called The Act, and is a Dragon's Lair-style 2-D animated narrative, controlled not by joystick and buttons, but by a single knob, which simply raises or lowers the intensity of your character's reactions to whatever's happening. Well, not surprisingly, a non-standard, dialogue-heavy, non-golf arcade game in bars (in which a perfect game takes an hour and one could theoretically spend twenty hours solving it) did not test well and plans for a widespread arcade release were scrapped. 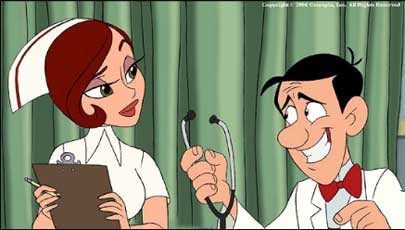 Arcade units are apparently out there and available, and there seem to be whispers of plans for this game to come to PCs, but I want this to come out on Xbox Live Arcade.

I loved Dragon's Lair as a kid, and I was fascinated with the idea of "controlling" an animated sequence. I mean, you only choose either the right or wrong decision, and either live or die, but there was something that made it even more thrilling than an animated movie. So let's move it, Cecropia! I'd buy this in an instant on Live Arcade!

So, you want to invent it? Already know about something just like it? Got a reason why it would never work? Got some suggestions? Got your own "I Wish Someone Would Invent..."? See you in the comments!
Posted by Unknown at 9:00 AM

As long as we are wishing, I want Loco Rocco (currently a PlayStation Portable exclusive) on PlayStation 2, Wii and iPhone. That is a fun game. Darn-it.

How hard would it be to convert The Act to an online thing, controlled by any number of keys, and then market it as a pay-per-play (like a quarter a play) via the pay-pal system ala McCoud's model for pay per view comics? I know nothin bout nothin but this seems doable...
Mostly, I just want to see this cool looking game.