First off, congrats to Tim Sievert (former BTA employee and current PUNY wizard) for his Harvey nomination for "Best New Talent." Of course, Tim's amazing work is anything but new to us here in Minneapolis, so it's about damn time he got nominated for this award.

Tim is being nominated for his Top Shelf book That Salty Air, and you can read about his current project, The Intrepideers, here. 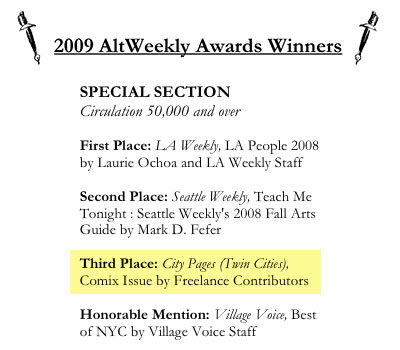 And congrats to everyone involved in last year's City Pages Comix Issue. City Pages won a third place trophy in the "Special Section" category. Cartoonists involved in the winning section include local as well as national names:

You can read all the comix online. Congrats to all involved, and stay tuned for information about this summer's City Pages Comix Issue!
Posted by Kevin Cannon at 10:55 AM

Does this mean CITY PAGES will actually get around to paying everyone now?

So if City Pages wins that Harvey Award, I will sort of almost have won a Harvey Award. Will I have visiting rights?