The Meaning Behind "I Love You With My Ford" 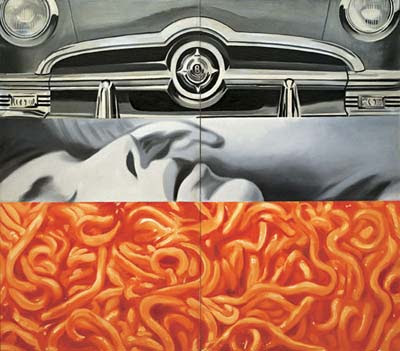 We here at BTA have received ones and ones of emails from fans saying, "Hey, I loved I Love You With My Ford -- but what does it mean?" ILYWMF is based on a 1961 James Rosenquist painting of the same name. This has been my favorite painting since I first saw it in a college art textbook, and I even tried to see it live at its current home in Stockholm, but it was not on display at the time. Anyway, I have no idea what the painting means, so I thought I'd infuse a little story into the three disparate panels by making a modern America retelling of the classic Pygmalion & Galatea story. The idea for the setting of the comic came from the specific Ford car that Rosenquist used in his painting -- a 1949 model that literally saved the company from ruin. At the time we wrote the script, present-day Ford Motor Company was going through similar financial trouble.

From saudiaramcoworld.com: "Born in 1912 in Lansing, Michigan to Lebanese immigrant parents, Richard Caleal began drawing pictures of automobiles at the age of seven. Self-taught and passionate about design, Caleal worked at Hudson, reo, Cadillac and Packard before going to Studebaker to become a member of the famed Raymond Loewy design team. In 1946 he began working as a free- lance designer for George Walker, who had been awarded the contract from Henry Ford ii for the design of the 1949 Ford. Working on the kitchen table in his small bungalow in Mishawaka, Indiana, Caleal designed and completed his prototype quarter-scale model, which was personally selected by Henry Ford ii to become the 1949 Ford. Referred to as “the car that saved an empire,” the 1949 Ford helped save Ford Motor Company from financial trouble, and earned Ford an astounding $177 million profit that year. Moreover, Caleal’s hyper-smooth, slab-sided design set the trend for the future of automobile styling."

And from www.hfmgv.org: "The 1949 Ford was revolutionary when it was introduced in the spring of that year. After the second World War, Ford Motor Company had been producing only remodeled designs of their 1942 automobile. Sleek and slab-sided with the trademark circle in the front grille, the 1949 Ford broke from previous ideas of design and engineering. By the late 1940s, the dominance of the Big Three was more apparent than ever. The 1949 Ford symbolized the company's revitalization under Henry Ford II, who had taken over for his grandfather in 1945. Modern management methods and dramatically new products returned Ford to second place in sales. Finding the company in total disarray, Henry Ford II lured Ernest R. Breech from the presidency of Bendix Aviation Corporation to be his executive vice-president and implement the recovery of Ford. Henry Ford II also lured in a dynamic management team to overhaul the company, including ten Harvard-trained ex-Air Force officers dubbed the Whiz Kids."

Artist note: James Rosenquist studied art at the Minneapolis Insitute of Arts and the University of Minnesota in the early 1950's. So... we've got that sweet Minneapolis connection.
Posted by Kevin Cannon at 11:33 AM

How does this help explain the meaning? you are only saying about the ford. the artwork shows how americans were becoming very materialistic during this period of time. top represents car middle sex and bottom food.

True, this post would be better described as the historical background of the comic.

I'm a bit confused by your comment, "The role of Richard Caleal, the clay model designer, is completely fictionalized."

Ford officially acknowledged Caleal as the original designer a few years back (I believe in 2003). The Whiz Kids, McNamara and the rest of them, helped re-direct Ford, but I do not think that they had anything to do with the '49 Ford.

Right. Caleal's role as designer is historically accurate, but everything his character says and does in the comic is fiction.