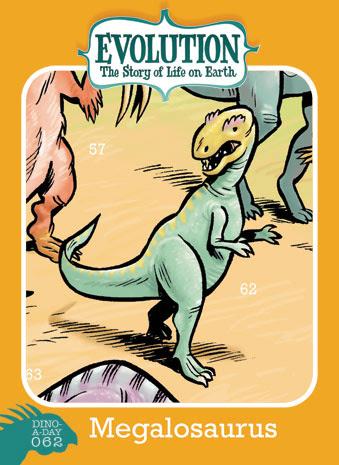 NAME: Megalosaurus
PRONUNCIATION: MEG-uh-lo-SAWR-us
ORDER: Saurischia
EXISTED DURING: Middle Jurassic and Early Cretaceous
DISCOVERED: England, 1676
FUN FACT: The first dinosaur to ever be named; Megalosaurus’ original fossil -- a piece of a femur -- was thought at the time to belong to a gigantic human, as described in the bible.

Source: Wikipedia
Pronunciation: DinoDictionary.com
Posted by Kevin Cannon at 7:30 AM