The Lutefisk Sushi show was a rip-roaring success! Everybody's stuff looked really great, and the show turnout was better than even I expected. My dad came to town to witness the festivities, which was totally awesome, and I believe he had a good time too.

Saturday morning we stopped by the BTA to have a look around. 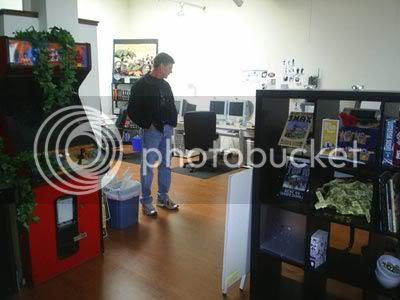 This Saturday, April 1st, is the battle of the century when cartoonists from around the nation wage all out comic war on each other for bragging rights and prize money. The two BTA teams are constantly at each other's throats while gearing up for mortal combat. My team will dominate.
Posted by tim sievert at 1:33 AM

Your Dad is clearly disgusted by the dirt and dust accumulating under the flat files.

For Tim's Dad and future visiting parents...someone should vacuum under there at their earliest convenience.

Having your kid go to college to major in Comics - Are you kidding me?

Seeing that he works at a place where you can play video games, play on the computer, and come to work when you want - PRICELESS!!!

i was just passing through and saw that picture, then i sat here for like 10 seconds pondering, is that MY dad??? then i read further and realized, YES, that IS my dad. well, he certainly is a jetsetter these days, travelling all over the country to go to art events and things.