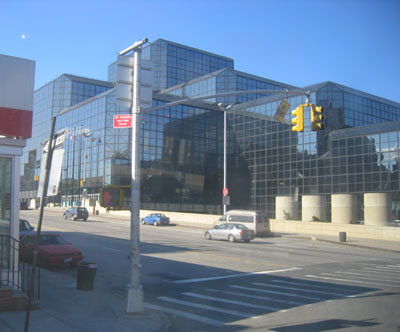 So, I went to the New York Comic-Con last week. You may have read about the crowds of people that the fire marshal wouldn't let in, because someone failed to anticipate that demand for a major comic convention in a major city would be slightly major. Bummer for them, although it's a pretty easy mistake to fix for next year.

This was the first big East Coast convention I'd ever been to, and it was cool to see a slightly different lineup of creators-- in particular those who live in New York, but don't make it out to Chicago or San Diego (the reason being that neither of THOSE cities are the center of the universe, I suppose). The convention was held at the Jacob K Javits Convention Center in ...midtown... ish. I'm a little bad at New York geography. I think it was in the 30s, street-wise. Above is a picture of the outside, and if you click on the picture, you can see the entryway in a super-awesome Widescreen deluxe presentation. 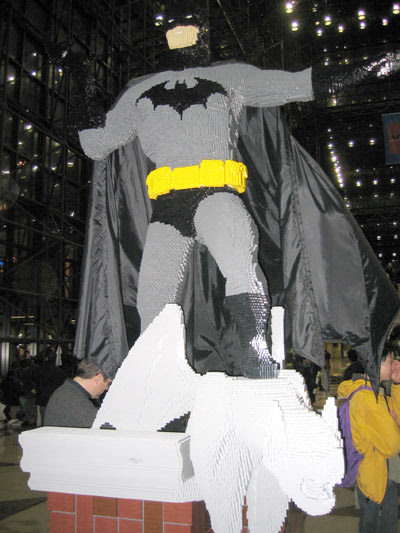 Play good, kids, or the Lego Batman will knock you silly. L.B. was guarding the entrance of the hall, and serving the double purpose of letting the people at the travel convention and the housewares convention that THIS IS NOT YOUR DOOR.

I was lucky enough to sit next to the creator of CIVILIAN JUSTICE, a comic that apparently has what looks to be an ironic cult following. The first issue of Civilian Justice involves the war on terror, and C.J. apparently performs what he likes to call a "terrorectomy". Now that I'm home, I'm kind of shocked that I didn't pick up an issue. 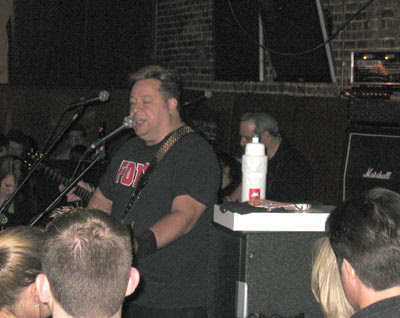 Saturday night there was a big do at a local bar, in which Joe Quesada's band played their particular brand of Springsteeny rock tunes. They rocked their hearts out, but we mostly drank in the back. 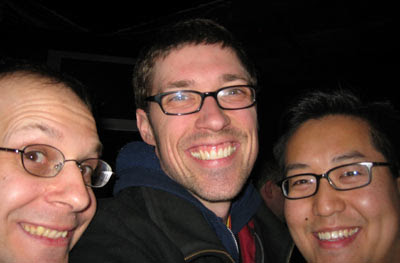 Here's me and my homie Stuart Moore on the left and my homie Frank Cho on the right. This was the second try at this picture, as a drunk Essad Ribic kept putting his finger across the lens. And that was the totality of our interaction. 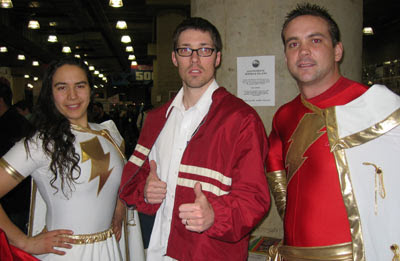 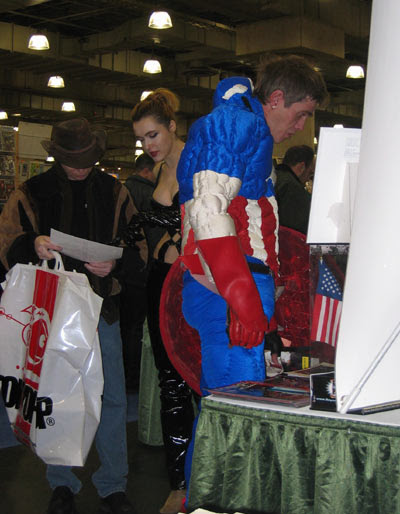 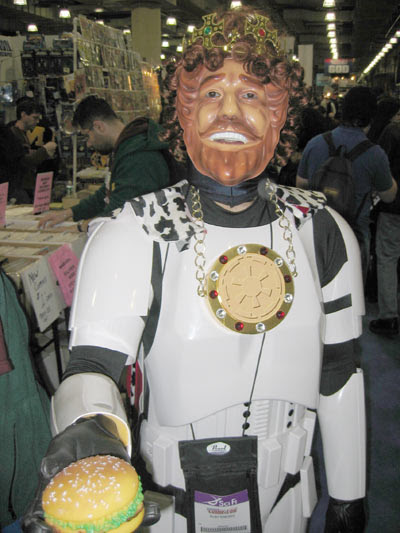 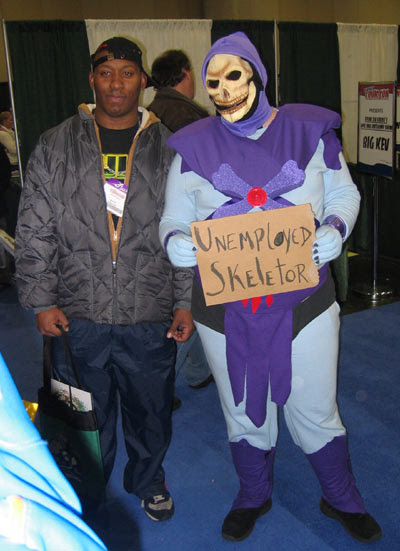 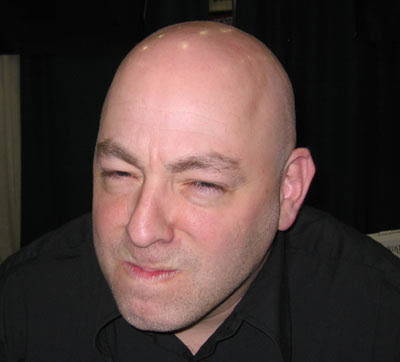 BENDIS! Sometimes when I come to a crossroads in life, I ask "WWBD?" The answer in this case is, "Bendis would write a caption." It would be filled with swears, though, so that is where the prophet Bendis and I part ways. My mom reads this blog. 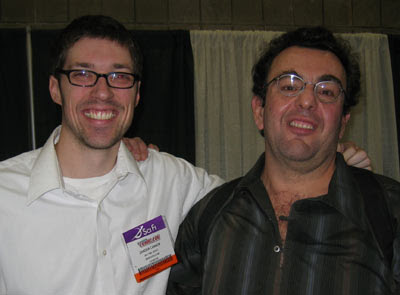 Here's me and SF author/columnist/comic book writer Paul DiFilippo. I believe he was saying, "It's the button on the right. No, my right. No, no, the other one; you just turned it off. Okay, that one. Okay, now press it halfway down. No, it didn't take it. No, it'll flash. Okay, halfway down, then Ah! right. You got it. Uh... was I smiling?" 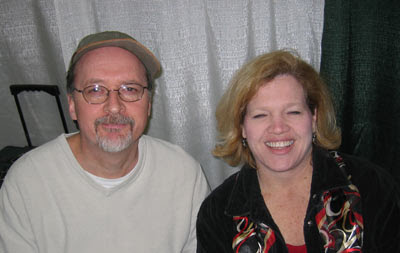 Some of my favorite people, Kevin and Deanna Nowlan, came in from Boondocks, Kansas just for the show. They got pickpocketed sixty-one times in three days. 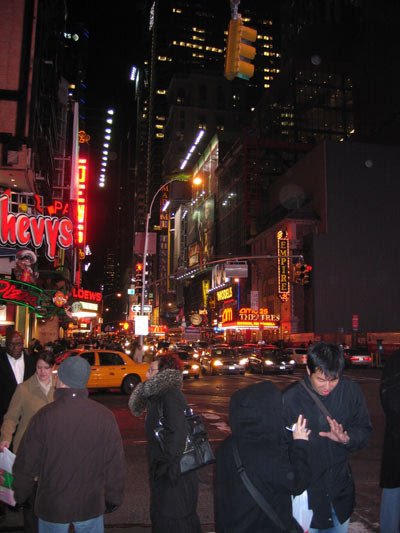 I did a uniquely awful job of booking my hotel for this show, and had to stay in North Bergen, New Jersey at a Day's Inn. The hotel was great, but since taxis charge twice as much to go to New Jersey, I had to catch a bus at the Port Authority on the half hour. It was a drag, but the neighborhood is cool to check out. It's full of tourists, and I got to go to Yoshinoya, a Japanese beef bowl restaurant I used to frequent when we lived in Japan. Ah, memories of grade B beef and a bunch of white rice. Mm!

Okay, so what I learned at this show: Don't stay in New Jersey. Don't mess with Civilian Justice. Get to the convention center early and get a good spot in line. Don't let the airlines delay your flight back to Minneapolis and then lose the bag with your originals in it (Well, do what you can on this one). 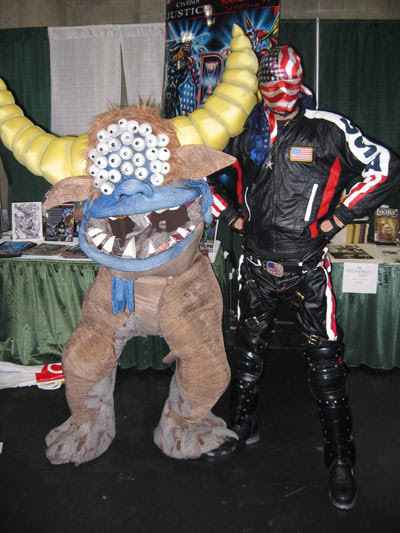 To conclude this post, it's a once-in-a-lifetime photo of the team-up of the decade. Terrorists and anachronistic animated knights, beware!
Posted by Unknown at 6:36 PM

Ironic.... America needs heros and if the powers at Marvel and DC are just too scared to go after REAL EVIL then all the more power to CIVILIAN JUSTICE for doing his part bringing those to justice that have, for years now, hidden in the shadows OF LIBERALS . All I can say is RAVEDACTYL SOLIDIFY.

Thanks for not putting any bad language in your blog, even if it is a direct quote from Brian Bendis! Excellent post--we felt like we were there.

I have reoccuring nightmares of the beyond comics intro.

That Ravedactyl guy has a name.... it is......
Graig Farrell Weich
and few since the beloved creator of Spidey Stan "The Man" Lee, has a singular vision burned so brightly in the comic cosmos. Check out his awesome work today, you won't be sorry.

Yeah, I was trying to avoid the name to avoid getting google hits. He's hard to think about without following up with a couple hours of web searchin'

The 20/20 interview in his reel is book-ended to make it sound like it's about his characters but is allegedly about food poisoning...fantastic.

BACK TO WORK EVERYONE! DON'T GET SUCKED INTO..THE BEYOND..

BURGER KING STORM TROOPER THANK YOU FOR FEEDING ME SINCE OCTOBER!!!!

ALL I CAN SAY IS IN CAPITALS! HELP!

There was cake at the QC comic con...

You only forgot to mention me saying hi at the DC booth and you totally blowing me off, other than that, a very thorough report!