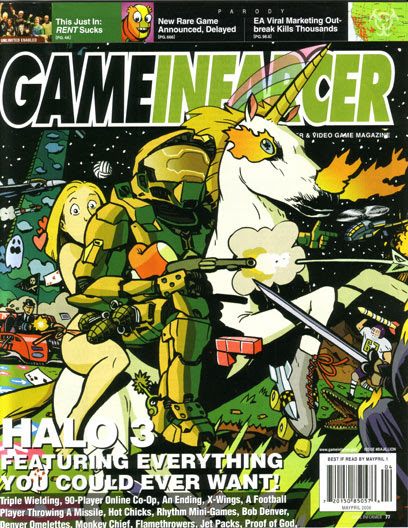 Thought we might not be nerds? Or more likely, thought we might limit our nerdiness to comic books? FAT CHANCE! Game Informer, a highly-respected video game magazine (as video game magazines go) located here in glorious Minneapolis, asked us here at BTA to draw a parody of what people are expecting out of the hotly anticipated video game "Halo 3". Let's not name names, but one of our members thought drawing the Master Chief astride a unicorn wearing rocket roller skates and firing a speargun while being chased by gangsters in a Formula One car sounded like... just possibly... the single greatest assignment that he had ever heard. Above is the cover to "Game Infarcer", the parody magazine-within-a-magazine that appears in every April issue.

It's on the stands now! Run, don't walk, to your nearest magazine retailer and demand it!
Posted by Unknown at 4:50 PM

my god this is the most awesome thing i have ever seen.

i must know more about this. who drew it, is it all computer? or was it inked outside the computer.

i can see britts ghost's in the background...her and her ghosts.

The black and white artwork was all done on paper (with a few touchups done on a blueline printout), then colored in photoshop. The nerdy nerd who drew it is yours truly.

Oh, and I just played Halo 2 against doodlehead up there and he whipped me good.

halo is such an awesome game. but i think your vision of it could make microsoft MILLIONS.

You know, I think this guy should've put The Case For Christ, by Lee Strobel, in the picture; I think it's pretty good proof for God.